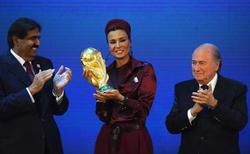 Money talks. That is the inescapable conclusion from a closer look at Qatar’s successful bid for the 2022 FIFA World Cup and the relationship between sports investments by oil-rich nations and acquisitions by their sovereign wealth funds.

The linkages do not constitute legal transgressions, but raise moral and ethical questions, highlight loopholes in FIFA guidelines for World Cup bidders and paint a picture of a distorted playing field in which cash-rich authoritarian power constitutes a competitive advantage.

Flush with cash from its energy exports and determined to position itself as a world sports hub, Qatar spared no cost in its campaign to win the bid the World Cup.

Recent research and media reports assert, however, a potential relationship between the votes of various FIFA executive committee members and Qatari investments and/or support for soccer in their home countries, as well as a link between the soccer-related activities of its sovereign wealth fund, the Qatar Investment Authority (QIA).

Sponsorships and acquisition of clubs “not only improve the respective clubs’ finances, but could also whet their appetites for investing in national companies in the target markets. What is interesting is that these football investments appear to effectively stimulate, or go hand-in-hand with, other industrial investments,” says Javier Santiso, author of The Emerging World Champions, a report published by the Barcelona-based ESADE Center for Global Economy and Geopolitics, and former chief economist of the Organization for Economic Cooperation and Development (OECD) Development Center.

On at least one occasion, Qatari officials discussed circumventing a written FIFA request not to hold high-profile events during the FIFA World Cup, the Journal reported. It said that senior bidding committee executives discussed during a January 4, 2010 strategy meeting the need to improve Qatar's standing within the world soccer community by helping South Africa's poor during the 2010 World Cup.

"If FIFA regulations prevent these initiatives then a way has to be found to do these under a different name (e.g. through the embassy or as the State of Qatar)," the Journal quotes minutes from the meeting as saying.

Qatari executives say the committee ultimately backed away from the plan to ensure that its actions would not be misconstrued.

While Qatar has never published the total budget of its bid, just its budget for marketing and event-related spending matched or topped total expenditure of its competitors, such as Australia which spent $45 million on its bid or the $10 million campaign cost of the United States.

Qatar’s Aspire Academy for Sports Excellence, which is controlled by the ruling family, last year added Thailand and Costa Rica, two nations with members on the FIFA executive committee, to its annual Aspire Football Dreams tournament, the largest talent hunt in soccer history.

Other countries represented on the committee—Paraguay, Cameroon, Ivory Coast and Nigeria already were included among the 16 countries participating in the hunt for the next generation of world class soccer players. More than half a million kids born in the mid-1990s from hundreds of cities in Africa, Asia and Latin America compete to be one of 25 players accepted at Aspire’s training academies in Qatar and Senegal.

A 2009 Qatari bid document, reviewed by the Journal, lays out plans for grassroots soccer training in Nigeria and to "build a football academy in Thailand emulating the Aspire Football Dreams Academy in Senegal."

Disgraced Nigerian executive committee member Amos Adamu said this week that he was seeking to be reinstated after being suspended in November for three years following claims he had asked for money in exchange for his World Cup vote.

Thai committee member Worawi Makudi is believed to have voted in favor of Qatar. Aspire has pledged to build a soccer academy in Thailand.

A FIFA investigation into allegations that Qatar conspired with Spain and Portugal to secure the support of the five Spanish and Portuguese-speaking members of the soccer world body’s 24-member executive committee for their respective 2022 and 2018 bids concluded that there were insufficient grounds for penal action.

Nevertheless, the relationship between Qatari soccer-related investments and activities and other commercial investments in the same markets is equally legal, and tracks similar operations by sovereign wealth funds in the Middle East and Asia. Whether or not such activities played an indirect role in the thinking of FIFA executive committee members is impossible to ascertain, but nonetheless constitute an interesting pattern.

It was the Gulf state’s first major acquisition in Latin America. Similarly, Qatar is negotiating the purchase in Argentina of agricultural land worth at least $100 million as part of its effort to ensure the nation’s food security. Qatar has also made investments in Turkey’s finance, energy and health sectors.

In his report, EADES’s Santiso uses the Libyan Investment Authority (LIA), Libya’s sovereign wealthfund, as an example of the relationship between soccer and commercial investments. LIA, a major foreign investor in Italy with stakes in financial institutions Unicredit and Mediobanca, oil company ENI and aerospace group Finmeccanica, holds a 7.5 percent stake in Juventus, which is controlled by the Agnelli family, owners of FIAT.

“What is clear is that the interest in the Italian club went hand in hand with the wish of the sovereign wealth fund to become a stakeholder in different Italian multinationals… The appeal of national clubs and sports stars produce a greater appetite for other assets in host countries.” Santiso says.