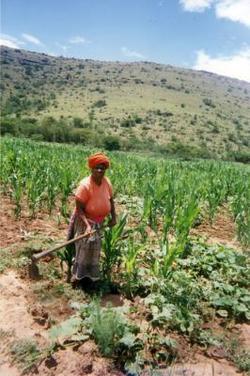 South African President Jacob Zuma said his administration is looking at ways to ensure greater access to land for the country’s black majority, including a possible ban on property ownership by foreigners.

“Land reform will now be based on the deracialization of the rural economy,” Zuma told a rally in the northern town of Polokwane today on the 99th anniversary of the founding of the ruling African National Congress.

“In order to have more land available for reform and restitution, the government is looking at three forms of land holding,” he said. These are state land, which can only be leasehold, limited freehold on private land and land leases for foreigners, though ownership will revert to South Africans, he said.

The government’s land redistribution policy aims to compensate black South Africans for the seizure of their property under white-minority rule, which ended in 1994. In February last year, Gugile Nkwinti, the minister in charge of land reform, said the government needed 75 billion rand ($11 billion) to meet its target of distributing 30 percent of farmland to black farmers by 2014, and it didn’t have the money.

The government appointed a panel in 2004 to probe possible restrictions on foreign land ownership. In a report released in February 2006, the panel recommended property sales to foreigners be suspended until new laws were drafted that would ensure more black South Africans were able to buy homes.

The government held off on implementing the recommendations after Pam Golding Properties Ltd. and other estate agents warned such restrictions would deter foreign investment.

Zuma said black South Africans needed a bigger stake in Africa’s largest economy as too many people remained marginalized almost 17 years after the end of apartheid.

Ninety-one percent of South Africa’s 50 million people are black, of mixed race or of Asian descent. In 2009, medium per- capita expenditure for black South Africans was 452 rand, while for whites it was 5,750 rand, government data shows.

The ANC, Africa’s oldest political movement, has dominated South African politics since taking power under Nelson Mandela in 1994, controlling 66 percent of seats in Parliament, eight of the nine provinces and five of the six main cities. The party is gearing up to contest local government elections, due to take place by mid-year.

Zuma won control of the ANC at a party conference in Polokwane in 2007 when he ousted then-President Thabo Mbeki with the support of the country’s labor unions and the ANC’s Youth League. He was appointed president of the country in May 2009.

South Africa’s Congress of Trade Unions, the country’s largest labor grouping, has been placing increasing pressure on Zuma to do more to cut the 25.3 percent unemployment rate and narrow income disparities.

Last year “should have been the year when we came out of the recession, but for millions of workers, their families and poor communities, things got even worse,” Cosatu President Sidumo Dlamini said in an e-mailed statement.

The Youth League wants the government to seize the nation’s mines, a proposal the party is investigating and plans to debate at its national conference next year. The league has also called for the state to be given greater power to expropriate land.

“We cannot accept the gap between the rich and the poor, we cannot allow the economy to continue to be in the hands of white males,” Julius Malema, the league’s president, told the rally. “We want the economy to be transferred into the hands of the people. Nationalization is the solution to the problems we are confronted with.”

State television screened a three-hour live broadcast of today’s rally, held at the 40,000 seat Peter Mokaba stadium, which was filled to capacity.