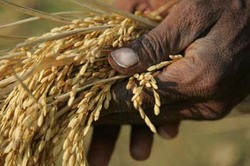 Mumbai, Jan 10 (IANS) With barely months to go before the second India-Africa Forum Summit, India Monday said the Indian model of 'green revolution' had an appeal for African countries across the board and underlined that boosting agriculture and food security were at the heart of its engagement with the 53-nation African continent.

'Agriculture is without doubt at the forefront of India's engagement with Africa in the current transformation phase,' Gurjit Singh, joint secretary in charge of east and southern Africa, told experts at a seminar on exploring twin themes of food security and India-Africa relations in the context of South-South cooperation.

'The Indian model of agriculture growth has attracted Africa across the board,' said Singh, while stressing that agriculture and food security are going to be high on the agenda of the second India-Africa Forum Summit that is expected to be held in an African country in April-May this year.

Singh, however, added that it was for Africa to choose its own model of 'green revolution' and underlined India's focus on capacity building, human resource development and skills transfer as key features of its Africa policy. 'We are not setting any agenda. We only share our experiences when we are asked to do so,' Singh said in a bid to distinguish India's agenda-free engagement with the African continent.

He added that Indian enterprises which are going into Africa in agriculture and other sectors should abide by rules and regulations and never lose sight of their corporate social responsibility. 'We want responsible investment by Indian companies,' Singh said amid allegations by some critics that Indian companies are indulging in land grab in Africa.

The two-day seminar, which has brought together experts from nearly a dozen countries to debate the trajectory of India-Africa engagement, has been organised by the University of Mumbai, in collaboration with the Nordic Africa Institute and the United Nations Development Programme (UNDP).

India is providing 300 new scholarships, specially in agriculture sciences, through the African Union Commission, which is being implemented by the Department of Agriculture Education (DARE) and Indian Council of Agriculture Research.

Total allocation for agricultural support to Africa are close to $40 million and will also include enhanced exchange of seeds and saplings, Singh said.

The India-Africa Framework for Cooperation, adopted at the end of the first India-Africa Forum Summit in New Delhi April 9, 2008, identified the development of sustainable agriculture as a key priority in the burgeoning partnership between India and Africa.

'Africa and India agree that agricultural development is an effective approach to ensure food security, eradicating poverty and improve peoples' livelihood, and agree to strengthen Africa and India cooperation in this sector in order to improve the food security of Africa and to increase its exports to world markets,' said the joint statement.

The framework envisaged cooperation in, among other things, capacity building and sharing of experience in policy analysis and planning relating to agriculture sector; cooperation in water resource management and irrigation practices, agro-infrastructure development, transfer of applied agricultural technology and skills transfer; and cooperation to combat agro-based diseases.