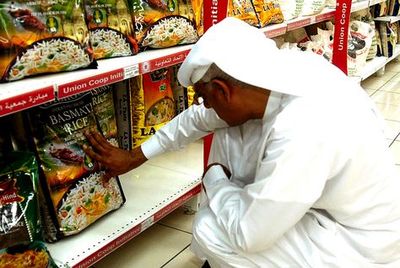 Inflation in Saudi Arabia accelerated to 6.1 percent in August, the highest level since February 2009, due to higher global food prices (Getty Images)

Saudi Arabia needs to build up its strategic food reserves as a buffer against rising global prices for basic commodities, executives and chamber of commerce officials said on Sunday.

Like other Gulf states the kingdom had suffered when international food prices spiked in 2008, forcing up its import bill. It has since sought to lease and buy farmland in developing nations to improve its security of food supplies.

The United Nations' food agency FAO said earlier this month that food prices hit a record high last month, above 2008 levels when riots broke out in countries as far afield as Egypt, Cameroon and Haiti.

As a means to address these sharp increases the biggest Arab economy should boost reserves for nine basic commodity foods, such as wheat, soya, sugar, barley, oils and rice, said Saad Al-Kharif, head of the food security committee at the Riyadh chamber of commerce and industry.

"Strategic storages are needed to secure food supplies and fight price fluctuations," he told reporters, addding that a drought in Latin America was fuelling food prices.

Argentina and Brazil are among some nine countries from which the kingdom imports grains, he said.

The government has commissioned a study into setting up such reserves and the chamber wants it to now go ahead and also include the private sector.

"We are encouraging the government. We are trying to encourage them," Kharif said.

Such storages could build up reserves for at least six months or longer, said Khalid Al-Rwis, head of the department of agricultural economics at King Saud University in Riyadh.

In an effort to save water resources, the desert kingdom abandoned a 30-year wheat cultivation plan and has reduced the amount of wheat it purchased from local farmers by 12.5 percent a year since 2008.

In 2009 Saudi Arabia also set up a company with a capital of 3 billion riyals to invest in farmland abroad.