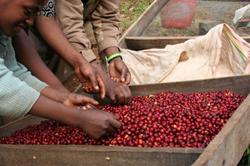 "The company is expecting the potential large profits that it plans to invest nearly $15 million in its Congo, Ethiopia and Brazil agricultural operations," the company said in a filing to the Bombay Stock Exchange (BSE).

The farming of crops including coffee, pulses, oilseeds, cereals, potato, sugarcane and vegetable would be undertaken on lease-hold agricultural land in these countries, it said.

ACIL also said that it will set up subsidiaries in these three countries and a consultant will be appointed to prepare a feasibility report on the planned agri-business.

Quoting reports about the land lease project of Ethiopia, the company shared that the Ethiopian government is offering fertile farm land to local and foreign investors at a give away rates in an effort to introduce large-scale commercial farming in its country.

The company's share closed slightly lower at Rs 3.89 on the BSE.