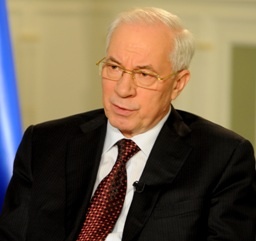 Ukrainian Prime Minister Mykola Azarov says that Ukraine won't be able to meet its demand for food without the revision of issues related to ownership in the agricultural sector as part of corresponding reforms.

"Ukraine is facing a situation in which it is unable to provide itself with foodstuffs," he said in an exclusive interview with Interfax-Ukraine on Thursday.

"Who could have thought that we'd see the day when Ukraine had to buy and import meat? Who could have seriously thought about that 20 years ago?"

"It's a signal that the acuteness of the problem in our agricultural complex has grown to an unthinkable scale, and it has become a threat to our security," he added.

According to him, investment needs to be attracted and the attitude to land should be changed in order to escape from the current situation.

"What could be done to bail out our agrarian complex? Huge investments are needed and the main thing is the need [to use] the owner's instinct. The [feelings of] the owner responsible for the land, [who is] working on it, and whose life will depend on it," he said.

The premier said the previous measures to reform Ukraine's agriculture had not been effective.

"That instinct of the owner is not there yet. The leasing of land, the sale and resale of certain plots of land and suchlike has effectively caused the situation in which the funds that need to be injected into Ukrainian land, into the Ukrainian agriculture complex, are being not invested," he said.

In the light of this, Azarov said he was surprised at the expansion of rapeseed and other industrial crop cultivation, without observing crop rotation standards and farming techniques.

"The crops of rapeseed, the crops of industrial cultures are robbing our land of its vitality, making it dead for the production of food for a number of years. I was surprised at how easily tenant farmers had been sowing huge areas of land with industrial crops," he said.

He added that the future land reform might become a reason for speculations on the subject of land, but he admitted there was a possibility of legislatively limiting the acquisition of land by foreigners.

"How do we prevent somebody buying our land cheap and so on? Let's say this issue is to be addressed to lawmakers. All these models could be created to make it quite natural for there to be a limitation on foreign citizens' rights to buy, let me stress again, our land on a large scale," he said.

However, he said that the reform of the agriculture sector could be conducted by 2012.

"The task of our government for the next year or two is to turn land into an investment resource, with the assistance of which we will raise substantial funds," he said.

Azarov stressed that with due regard for a great political importance of the reform, it will be conducted in such a way that farmers' interests are foremost.

"The issue is complex. The issue is political. Therefore, it's clear that we'll draw up a bill and we'll conduct discussions of the bill mainly with farmers, rural residents," he said.

"We're trying to find a formula which let us take into account international experience and the traditional views about our land."

The full interview will be posted on the Interfax-Ukraine news agency's main page.