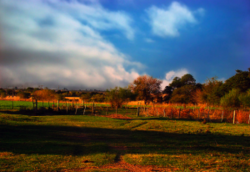 Sojitz will lease 11,000 hectares of farmland cultivating soybeans, corn, wheat and other crops in the Pampas region for export to Asia. It may expand the area under cultivation to 200,000 hectares in Argentina, Brazil and other South American countries by 2017 (Photo: Claudio Mufarrege).

By Tsuyoshi Inajima and Ichiro Suzuki

Sojitz Corp., a Japanese trading company, will start producing soybeans and other crops in Argentina for export to Asia to take advantage of rising demand, it said in a statement.

Sojitz has set up a venture to produce 30,000 metric tons of staples, according to the statement on its website. Sojitz plans to increase production to as much as 1 million tons of soybeans, corn and wheat by 2017 with sales of about 1.5 billion yen ($18 million), Kuniyuki Wada, deputy director of Sojitz’s agribusiness department, told reporters today in Tokyo.

Sojitz and other Japanese trading companies including Marubeni Corp. and Mitsui & Co. are expanding into agriculture in South America as demand for staples rises in China and other Asian countries. World food production has to increase by 70 percent by 2050 to meet the needs of a rising population, according to a United Nations forecast in September 2009.

Corn futures are up 26 percent this year, while wheat and soybeans have risen 23 percent and 12 percent respectively.

The company identified agriculture as a priority area in its mid-term business plan announced in April 2009. The Argentine investment will be the first project for the new agribusiness department it started last year.

Sojitz’s venture, Sojitz Buenas Tierras del Sur S.A., will lease 11,000 hectares (21,181 acres) of farmland cultivating soybeans, corn, wheat and other crops in the Pampas region in central-eastern Argentina, according to the statement. Sojitz has invested about 500 million yen in the venture.

It may expand the area under cultivation to 200,000 hectares in Argentina, Brazil and other South American countries by 2017, Wada said. Sojitz may also purchase farmland, he said.

State-backed Nippon Export and Investment Insurance will provide insurance for Sojitz to cover overseas investment risks, according to the statement.

Soybean imports to China, the world’s most populous nation, may rise 27 percent to more than 54 million tons this year, the National Grain and Oils Information Center said today.

Processors increased purchases of new-crop South American soybeans by 25 percent from a year earlier, the grain center said on Oct. 25.