Egypt’s conundrum over food security and the Nile’s water 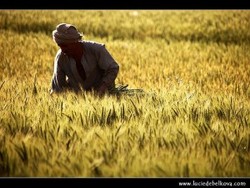 Russia’s decision this year to halt wheat exports has dealt Egypt a severe blow and brought many questions to the fore. Egypt’s population explosion is fast surpassing its agricultural capacities, and the Nile river water resource, which irrigates its reduced wheat farms, has also come under heavy scrutiny as other Nile riparian countries seek a break from colonial era agreements that give Egypt and Sudan about 90% of the Nile’s water. The clock is ticking away with incredible speed as Egypt tries to develop external strategies. Strategies that are increasingly becoming risky for Egypt.

In August 2010, Egyptians discovered that an environmental catastrophe in Russia could directly affect their livelihoods after Russian Prime Minister, Vladimir Putin announced that his country was suspending the exportation of wheat because of devastating bush fires that had consumed large portions of its wheat farms. The Egyptian government assured citizens that the Russian decision would not have an immediate impact on the country as it had some 3 Million tons of wheat in reserve, enough for a few months ahead.

Egypt is presently the second biggest importer of wheat worldwide, and Egyptians stand to suffer should the Russian decision linger for more than the “few months” needed before a complete depletion of the country’s wheat reserves. Egyptians are worried and the public is demanding answers to some vital questions.

Why is Egypt, a country that once exported large quantities of wheat, now threatened by an act of God that takes place several thousand kilometers away, in Russia? As farmers question the impact of the government’s decision to import more wheat instead of encouraging domestic production, it goes without saying that producing wheat locally is simply not economically viable for the northern African Country. In fact, in 2007 the price of a ton of wheat produced locally amounted to 1100 Egyptian pounds against an international market price that stood at 900 Egyptian pounds.

Following the heavy financial losses in the agriculture sector linked to the growing of wheat, the Egyptian government reduced the amount of land allocated for wheat cultivation in favor of the expansion of much higher yielding export products like strawberries and other fruits.

In recent times, the already reduced wheat producing sector has been hard hit by the tug of war among the Nile Basin countries, seven of who are seeking a “fair share of the Nile’s water resources”. Egypt and The Sudan, under colonial era agreements, have the right to about 90% of the Nile water resource (55.5 billion cubic meters for Egypt and 18.5 for Sudan, annually). Ethiopia contributes about 80% of the total Nile water downstream through the Blue Nile, — which provides 59% of Egypt’s Nile water, — was among the least favored by the 1929 and 1959 accords between Egypt and Britain (on behalf of its colonies) and Egypt and Sudan.

Seven out of the eight remaining Nile Basin countries have threatened to build dams in their countries to improve their agricultural sectors and also to address their water own needs. Egypt sees this as a threat to its national security and has suggested that it would discourage the move militarily if it has to.

Dr Abdel Salam Gom’a, former president of the center for wheat research and also known as the Egyptians the father of wheat, believes that Egypt has to use almost half or more of its arable land to cultivate wheat if it wants to achieve autonomy. But analysts have written Salam Gom’a’s suggestion off saying it would put too much pressure on an already scarce water resource.

However, the Egyptian population is expanding and the capacity to provide enough food from cultivable lands is shrinking. And if the country wants to achieve self-sufficiency, it has to increase lands allocated to wheat production. Needless to say, the country is increasingly finding itself caught between a rock and a hard place, because changing its wheat growing policy translates into increasing the quantity of water (from the disputed Nile water) it needs for irrigation.

Climate change has also taken its toll on the mostly desert northern African country. Weather patterns have drastically changed in the past twenty years, and some believe that the deteriorating climate conditions in the country could get worse. Dr. Ayman Farid Abo-Hadid, chairman of the state-run Agricultural Research Center argues that the productivity of wheat producing-lands has been decreased by 12% in the 2010 season because of climate change. To challenge this phenomenon, Dr Abo-Hadid believes that it is necessary to modify the wheat planting dates starting from next season to avoid the negative impact of climate change.

A more logical solution proposed by Dr. Mohamed Nasr El-Din Allam, Minister of Water Resources and Irrigation, on October 11, 2010 indicated his ministry’s intention to provide the irrigation needed to grow wheat in areas proposed by the Ministry of Agriculture whilst decreasing lands allocated for the production of non vital crops. The two ministries decided to decrease farmlands that consume large amounts of water such as rice and sugar cane farms.

This proposal comes several months after the Egyptian government began considering other options including growing Egypt’s wheat requirement in countries with enough arable land to spare. And in a backdrop of a longstanding disagreement over the Nile’s water resource with Ethiopia, which leads the group of upper riparian Nile basin countries to renegotiate Egypt and The Sudan’s vast water share, the two countries (Egypt and Ethiopia) on December 30, 2009 signed a Memorandum of Understanding to establish an Ethiopia-Egypt Council of Commerce.

The possibility of growing Egyptian wheat and other cereals on fertile lands in Ethiopia became known when it was revealed that the Horn of Africa country was ready to grant 20,000 hectares of land to Egypt, making the latter the biggest foreign acquisitor of agricultural land in Ethiopia, yet.

Early September 2010, Egypt again signed another deal, this time, with the Sudanese government. The deal gives Egyptian agricultural entities access to arable lands in The Sudan. Dr. Ayman Farid Abo-Hadid signed the deal on behalf of the Egyptian government saying “Growing essential crops like wheat in other water-rich African countries where fertile land is in abundance is an important solution,” and “Cultivating wheat in other African countries will reduce the cost of imports.”

It is not known whether or not Dr. Abo-Hadid who argued that Egypt should modify its “wheat planting dates” still stands by his proposal. In the meantime, Egypt’s future, faced with an increasing population, the ever encroaching desert, the Nile water crisis, and above all the Russian wheat crisis, hangs in the balance. It is a bleak future that calls for long term domestic strategies to safeguard food security.

And domestic strategies are of the essence, as foreign land grabs by countries continue to attract widespread condemnation. A report by the the International Food Policy Research Institute (IFPRI), a Washington-based think tank, suggested that "the state often formally owns the land, the poor run the risk of being pushed off the plot in favor of the investor, without consultation or compensation." To this end, anti-poverty campaigners Action Aid have called for an independent United Nations commission to establish an enforceable code of conduct in the purchase of foreign lands.

A typical example took place in 2009 when South Korean firm Daewoo Logistics was forced to abandon a project to lease one million acres of land in Madagascar to produce corn following criticism that local people had not been consulted.