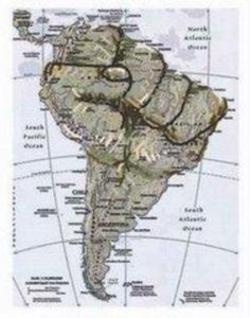 Right now communities in Latin America, as around the world, are suffering a new kind of invasion of their territories. These invaders are not the descendants of the European conquistadores, who appropriated land, gathered slaves and plundered their colonial domains. Nor are they the big finqueros (estate owners) of the 19th and 20th centuries, who expanded their properties by carving up the territories of indigenous peoples and creating vast plantations for the production and export of commodities such as sugar cane, coffee, cacao, banana, henequen, gum, rubber and hardwoods, and who relied on what has been called “indebted servitude”, forced labour under slave-like conditions. The new landowners are not those who brought industrial agriculture into Latin America either, who exploited local people’s ancestral knowledge in order to adapt their methods to the new environment and climate.

It may be said of all these notorious characters, rooted to “their” lands and mansions, that they were physically present and politically powerful within the region. They fought continually among themselves to consolidate their fiefdoms (leaving a huge toll of dead soldiers). They made enemies and forged alliances to expand their control over water, labour, commerce, elections, public policies and access to land – regardless of the rights and the lives of others. Yet these overlords lived on or frequently visited their properties, and so came face-to-face with the resistance and rebellions of the people who had been invaded and dispossessed. No one feels nostalgia for them, but communities fighting them could do something directly, know who to struggle with, where to do it and when.

The history of Latin America is one of agrarian conflicts, and of indigenous peoples struggling to defend their ancestral territories. A new chapter of this history is opening. Another wave of land grabbing is hitting the Americas, and this time it operates from a distance and wears a halo of “neutrality”. Today’s land grabbers (as thoroughly explained in governmental web brochures) say that they are merely responding to food insecurity and a world crisis “that forces us to grow food wherever we can, even if we outsource production, because we will bring home this food for the benefit of our citizens”. But when we dig a little, the financial monster shows its tail. The land grabbers are in fact big corporations and joint ventures investing enormous amounts of money in land, food production, the export and import of commodities, and food-market speculation.

Millions of hectares of farmland in Latin America have been taken over by these foreign investors over the past few years for the production of food crops and agrofuels for export. Much of the money comes from US and European pension funds, banks, private equity groups, and wealthy individuals like George Soros, and it is being channelled through special farmland investment vehicles set up by both foreign and local companies. Brazil’s largest sugar company, COSAN, has a specialised farmland investment fund called Radar Propriedades, which buys Brazilian farmland on behalf of clients such as the Teachers’ Insurance and Annuity Association–College Retirement Equities Fund of the US. Louis Dreyfus, one of the world’s largest grain-trading multinationals, has a similar fund into which American International Group (AIG) has invested US$65 million. While media attention has focused on land deals in Africa, at least as much money and more projects are in operation in Latin America, where investors claim that their farmland investments are more secure and less controversial – ignoring the struggles over access to land being waged in practically every country on the continent. More and more investors and governments from Asia and the Gulf are training their sights on Latin America as a safe place in which to outsource food production.

Most governments in Latin America embrace these developments, with diplomatic missions frequently being sent abroad to sell the advantages of investing in their countries’ farmland. The Brazilian Minister of Development, Miguel Jorge, recently told reporters: “Some Saudi princes with whom we met last year […] told President Lula that they do not want to invest in agriculture in Brazil in order to sell here in Brazil, they want food supply sources. They need food. So it would be much more effective to have them invest in agriculture in Brazil in order for us to be direct suppliers to those countries.”

But Brazil is not only a target of the new land grabbers, it is also a source. Brazilian investors, backed by their government, are buying land to produce food and biofuels in a growing number of other countries in Latin America and Africa. In neighbouring Guyana, for instance, the Brazilian government is financing the construction of roads, bridges and other infrastructure to open up Guyana’s ecologically sensitive Rupununi savannah to large-scale agricultural projects that will export crops to Brazil. Some Brazilian rice producers who are now negotiating with the Government of Guyana for 99-year leases to large areas of indigenous lands in the Rupununi savannah were recently forced by the Brazilian Supreme Court to abandon lands that they had taken illegally from indigenous communities on their own side of the border, in Raposa Serra do Sol. The multinational seed company RiceTec has approached the government of Guyana for about 2,000 ha of land in the same region – a diverse and fragile ecosystem that is home to several indigenous peoples. With this new way of doing business, the former landlords and invaders get new opportunities to grab land, with fewer economic and political risks, and a new, “respectable” title of “foreign investors”.

Much is at stake in this new wave of large-scale land grabs. They entail a huge loss of national sovereignty. Any country that sells or leases vast expanses of arable land through long-term contracts to another country or foreign corporation is jeopardising its own national sovereignty. Such deals hasten the more general dismantling of the State – in which more and more functions are cut, privatised and transformed to suit the interests of big business – and the larger territorial dispossession of peoples and communities. As a result, labour is dislocated and migration intensifies. Food production too is dislocated, since, under these deals, governments or private investors take over land to produce food for export to people elsewhere. Investors arrive with their seeds and tractors, and even labour, to extract nutrients from the soils and water of the “host country” and ship them back to their home countries or to global markets in food commodities. The host countries cannot be considered “exporters” in the traditional sense, since no country, no local people are really involved in the projects – just land that corporations exploit for their own profit, without restriction.

Yet the lands targeted are never empty, idle or not needed by local people without access to sufficient land. The first question that must be asked is, therefore: who are the real owners or custodians of the land that is being grabbed and controlled from afar? How is it that our governments can put such huge expanses of land at the disposal of foreign governments or corporations? Are they privately owned? Or are governments simply expropriating them for ad hoc commercial arrangements? It is said that the lands are only being leased, not sold, but what is the difference – in terms of the devastation – between being sold outright and leased for 50 or 99 years? The lessees will eventually hand back not only the land, depleted and ruined, but also the cost of recovering its fertility. These land grabs all drive forward the expansion of a destructive model of industrial agriculture.

The new wave of land invasions also complicates people’s defence of their territories. The invader is more difficult to identify. The legal mechanisms that communities can utilise to defend against dispossession, devastation or pollution are not clear. Even where the investors can be identifiable, they are shielded from the affected communities by distance and by complex legal structures. Any “battle” against them is set in a time and space that is not defined at all by the communities or organisations.

The State, instead of protecting its people, protects the investments of foreign companies and governments by criminalising and repressing the communities who defend their territories. Borders thus lose meaning. The structures of the host State serve the interests of their new foreign “bosses”, not in the manner of the old colonial system of tribute, but through the new neoliberal commercial system, where laws and regulations are dictated by free trade agreements and investment treaties instead of national constitutions or even international law.

But the most profound long-term consequence of this new wave of land grabbing is the expansion of corporate control over food production. Over the last fifty years, corporations have constructed the framework that facilitates today’s land grab, and now they are moving in to reap the harvest. Land grabbing is not simply the latest opportunity to make speculative investments for quick, massive profits; it is part of a longer process in which agrochemical–pharma–food–transport corporations are taking control of agriculture.

This is why self-governing communities prepared to defend their territories and their systems for managing communal land are a real threat to these schemes. Every organisation that stresses the importance of food sovereignty, from the community level up, will understand that this becomes an impossible feat in countries or regimes that allow and encourage land grabbing. Indigenous communities in Latin America know that without control of their own land they lose control of food production, and their farming simply becomes a new form of sharecropping. Thus more and more communities and organisations insist upon full control over their land, to grow their own crops, using and freely exchanging their native seeds and local knowledge. They insist on complete control of their water, forests, soils, settlements and pathways. And they insist on self-government, making decisions in assemblies.

The new land grabbers, on the other hand, want to enclose more of the commons. They want to dismantle our relationships and connections. They no longer need to invade: they can make commercial deals. They no longer have to carry the burden of maintaining slaves; they can rely on a ready supply of low-wage labour. They are no longer responsible for crushing the rebellious; the host governments will deal with those issues. If they do not, appropriate international companies will provide the service through informal gunmen. Neoliberalism is the invention of scheme upon scheme to avoid responsibility. To reverse the tide, we need to base our future upon taking responsibility.

•   The website that monitors land grabbing worldwide is http://farmlandgrab.org