Struggles against land grabs in Gambella: Interview with Nyikaw Ochalla

Ethiopia is one of the main targets in the current global farmland grab. The government has stated publicly that it wants to provide 3 million hectares of farmland in the country to foreign investors and around 1 million hectares have apparently already been signed away. Much of the land that these investors have acquired is in the province of Gambella, a fertile area that is home to the Anuak Nation. The Anuak are indigenous people that have always lived in Gambella and who practice farming, pastoralism and hunting and gathering.

GRAIN spoke with Nyikaw Ochalla, an Anuak living in exile in the United Kingdom, to better understand the consequences for the Anuak and other local communities from this new wave of land deals in Ethiopia.

GRAIN: How will these large-scale projects affect the agriculture of the Anuak? 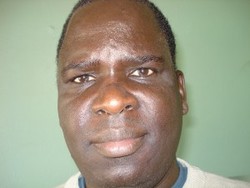 Nyikaw OchallaNyikaw Ochalla: The Anuak are a distinct people that have always lived in close connection with their environment. As an indigenous population, they have been marginalised by the government for many years. They mainly sustain themselves through farming, hunting and fishing, while some Anuak are also pastoralists.

The attraction of Gambella for these foreign investors is its fertile lands. But the area is fertile because the local people have nurtured and maintained its ecological systems through their agricultural practices. They may not have had access to modern education but they have a traditional means of cultivation, which includes rotation. When the rainy season comes, they move to the drier areas and, when the dry season comes, they go to the river banks, making sure that they manage their environment effectively. So all of the lands in the region are utilised. Each community has and looks after its own territory, and the rivers and farmlands within it. It is a myth propagated by the government and investors to say that there is waste land or land that is not utilised in Gambella.

With the current trend of large-scale agricultural projects in Gambella, many people are coming in claiming to know the best practices for agriculture. The government is assuming that this is a fertile land, but the agricultural projects it is pursuing in the region will devastate the soil. We are already seeing a rise in temperatures in Gambella from climate change, which is making the lands more fragile. These large-scale projects will undermine the practices of the indigenous population and destroy the fertility of the soils, as has been the case in other parts of Ethiopia. One of the reasons why Ethiopia suffers from recurrent famines is because of poor agricultural practices that were encouraged by government programmes and that did not consider the long-term health of the soils.

GRAIN: Are the local people aware of the deals the government is signing with foreign investors for land in Gambella? Nyikaw Ochalla: These are secret deals between the government and the land grabbers, in particular the foreign investors. I very much doubt that the regional government is even aware of these deals. This land grab is something that is happening in Addis Abeba, the capital city of Ethiopia. There is no consultation with the indigenous population, who remain far away from the deals.  The only thing the local people see is people coming with lots of tractors to invade their lands. And they have no place to voice their opposition. They are just being evicted without any proper consultation, any proper compensation.

Resistance to these projects is difficult given the past experience of the indigenous people. Back in 2003, under the pretext of an attack on a UN vehicle, the Ethiopian army went on a rampage and killed over 400 male Anuaks. It's an ongoing and severe humanitarian disaster. Many Anuak fled their lands to go to other parts of the continent, such as Sudan where there are thousands living as refugees. And, as we speak, the government has decided to send more contingents from the army into the region. The clear intention is to crush any opposition that might arise to these land grabs. There is currently a curfew in Gambella, imposed by the central government. What we are seeing today is a continuation of what happened in 2003 and I believe that the current regime has calculated this very well to make sure that the indigenous populations will have no voice, no means of protest. People are very fearful to speak about this landgrabbing. But they know that it will be destructive for their future, that losing the land for 50 years to a foreign company will leave them destitute and leave the land in very poor conditions. So conflict is a possibility that may erupt, given the lack of possibilities for other means of resistance.

GRAIN: How is the large Ethiopian diaspora reacting to what is happening?

Nyikaw Ochalla: There is a mix of views. A small fraction of the diaspora keenly support the current policies of the Ethiopian government simply because they are beneficiaries of land leases and also members of the ruling party.  But I think the majority is very concerned. It is high time for us to come together in the interests of protecting the future land for the Ethiopian population because it is not only the Gambella population that will be affected. The land grabs are happening across the country and they are happening as the population of the country is increasing. The future is very difficult to foresee as it will be increasingly difficult for people to get access to land.

GRAIN: Can you imagine a scenario in which the local population benefits from these large land deals?

Nyikaw Ochalla: I doubt very much that such a win-win situation is possible. We are talking about a regime in Ethiopia and other governments in Africa targeted by these investors that are very corrupt. They think of themselves, not the people.

No one would trade working the lands as they have for centuries to work the lands as a daily labourer for a pittance in wages. If the question is about increasing agricultural production, the most ideal way is by supporting the indigenous population in small-scale farming in a manner that sustains the environment.

GRAIN: Why is the Ethiopian government so committed to handing the country's farmland over to foreign investors? The Ethiopian government is in fact playing a more sinister game and the international community is either ignoring or going along with it to satisfy its own interests. This government uses every means to control the political power in the country, and creating a class society, getting more money from investors, allows it to buy off power.

The land grabs are also a pretext to create a vacuum in the region so that the indigenous people cannot have a voice to oppose the government. This is a regime that has no principles when it comes to morality. It claims to respect the rights of indigenous peoples, but the promised devolution of power has gone astray. The land is supposed to be controlled by the local people, through a state system. But now the central government has decided to intervene. They want to crush any opposition, whether at the local level or the national level. And they will try to do this by creating a class society by economic means.

GRAIN: Can you explain a little more about how the land grabs interact with the government's political agenda?

Nyikaw Ochalla: When the current regime came to power in 1991, it was supported by the Anuak people, who were opposed to the former socialist regime's land policies and its destruction of their cultural values. That regime had instituted a policy of colonisation in Gambella, bringing in thousands of people from outside of the region to settle there and cultivate the land. It implemented a state farm model as a way to cultivate cash crops. But because the local population was not consulted they resisted these policies and took sides with the current regime.

As a result, the new regime granted them autonomy at the state level. But that autonomy has subsequently been greatly restricted. Elections are now not being allowed at the state level for fear that representatives of the indigenous people might be voted into power. Today, the state officials are appointed by the central government.

It would not be improper to say that this government is pursuing systematic genocide against the indigenous population. Today there are a high number of Ethiopians from other parts of the country moving into Gambella to work on the large-scale agricultural projects. This is a very critical moment for the future of the indigenous people of Gambella.

The foreign investors that are going to come into the region will bring in some job opportunities but these will mainly be for people from outside of the region. This suits the interests of the government because it would like to do away with the indigenous population, and it can no longer simply kill-off the people as it has in the past because of the problems this generates for its image. By bringing in foreign investors the international community will not argue that this is systematic genocide. But, as we know, the indigenous people will be evicted from their lands and demographic change will clear them out of the area.