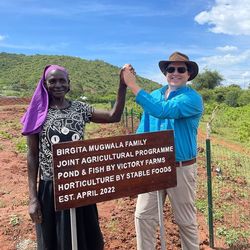 Victory Farms was founded and is run by US investment banker and entrepreneur Joseph Rehmann (Photo: Victory Farms/IG)
Farmers Review Africa | May 29, 2022

The round was led by two angels, managing director of Bain Capital Ed Brakeman, and Hans den Bieman Director of Sealand Aquaculture. He is the former CEO of Mowi (formerly Marine Harvest), the largest producer of farmed salmon globally.

Also participating in the round was another angel who is a contributor to the Forbes Technology Council and existing investor DOB Equity. The funding comes after the commercial fish farm secured a mezzanine debt investment from the ag-focused social impact investor AgDevCo in 2021, and investment from the private equity firm DOB Equity in 2020.

The startup has seen significant growth since its founding in 2014; it now has 600 employees, over 55 branches in Kenya, and generated $17 million in revenue in 2021. It is targeting a 15x growth in the next five-to-six years.

Fish feeds over 200 million Africans, according to the United Nation’s Food & Agriculture Organization (FAO). In most regions of the continent like East Africa, the supply of fish annually falls short of demand. This is primarily because fishing rates are unsustainable. A study published in the Marine Ecology Progress Series Journal reveals that fish stocks along the coast of East Africa are depleting to alarmingly low levels, with 70% of the reefs below sustainable levels.

The Kenyan fish market, which is valued at around $5oo million according to Victory Farms, still has to deal with unsustainable fishing practices. According to the company, there has been a 90% decline in tilapia, which is the most popular freshwater fish, as the human population surges.

“The problem is the wild catch cannot keep up and it isn’t going to bounce back, at least not for a long time. The traditional way of doing aquaculture is also very inefficient and that’s the way that’s practiced almost everywhere in Kenya and East Africa,” Joseph Rehmann, CEO and co-founder of Victory Farms told AFN.

Victory Farms was founded in 2014 by Rehmann and Steve Moran. Rehmann had a background in investment banking and got to work on an aquaculture project in West Africa.

They identified the high but unmet demand for fish in the East African market. While the deficit was being filled by Chinese-sourced fish, the quality was questionable. They set out to produce quality tilapia to supply across Kenya and subsequently expand to other East African countries.

“We saw an opportunity to build an end-to-end protein platform. It’s really a science-driven and tech-enabled platform significantly disrupting traditional businesses through the use of technology,” says Rehmann.

According to Victory Farms, this system makes its farms 99.9% more land efficient compared to traditional tilapia aquaculture. The company is on track to produce around 8,000 tonnes of fish this year working with 15,000 market trading women who source from its 55 branches countrywide to supply to their consumers. The women who receive 80% of Victory Farm’s produce are assured of a consistent supply of high-quality fish, which cannot be guaranteed from wild catch. The remaining 20% is split between restaurant suppliers and individual walk-ins at the company’s branches.

Victory Farms is now edging towards precision fish farming through an automated drone system that can predict the future performance of fish. The company is currently looking to partner with an aquaculture research company to help them deploy drones that will monitor fish ponds. According to Rehmann, this move would help them infer the health of the fish based on the colour of the water. They could then adjust feed or oxygen levels in the water and ultimately predict future production volumes.

Fish farming is rampant in Kenya. While Victory Farms has the highest number of fish farms in the country, other players in the market include Mwea Aquafish Farm, Africa Fish Farming, Safi Fish Farm, Nyanam Fisheries and Lake Naivasha Fish Farm to name a few.