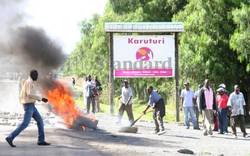 Naivasha based Karuturi Flower Farm which was put under receivership seven years ago leaving over 3,000 workers jobless. The Supreme Court gave Stanbic Bank the go ahead to auction the farms assets. [Antony Gitonga, Standard]

By Julius Chepkwony and Anthony Gitonga

Cash-strapped Karuturi Flowers in Naivasha is back in court in a bid to stop receiver managers from auctioning its property over Sh1.8 billion debt.

Justice Alfred Mabeya on Wednesday certified the application as urgent and directed it be served on all parties.

Karuturi claims the joint receiver managers placed an advert in one of the dailies on July 26, 2021, advertising its property for auction.

The notice invited interested persons to submit their expression of interest by August 13 for the purchase of its assets. The deadline was subsequently extended to October 7.

The advertisement was made jointly with Kolluri Sastry of Patel Shah, Joshi and Associates, a receiver appointed by ICICI Bank over Surya, Rhea and Karuturi.

Thoithi and Mucheru were appointed by CFC Stanbic Bank Limited.

Also listed are land reference number 10854/60 being title number IR 87312 in the name of These Holdings Limited. The land has housing units, a school, a hospital, irrigation equipment, fertigation unit, motor vehicles, motorcycles, office furniture, tractors among other movable equipment.

Karuturi, Rhea and Surya claim the intended sale is unlawful as there is no valuation done on the property.

They also claim that both the receivers and liquidators have not complied with various provisions of the Insolvency Act.

"Mr Kolluri Sastry has not received any permission from the court for purposes of selling plaintiffs' assets as required by law," read the petition in part.

The three companies further claim the acreage of the properties to be sold has been greatly reduced and does not reflect the accurate size on the ground.

The action and conduct of the receivers, the company said, will expose Karuturi, its promoters, shareholders and other creditors to extreme losses.

Sai Ramakrishna Karuturi, the director of Karuturi Limited and a resident of Bangalore India, wants the court to issue orders barring advertising for the public and or any purported sale of the property.

He also wants the receiver managers to be compelled to provide a current valuation report of all the properties listed for auction.

The petitioners further want the receiver managers compelled to provide information and accounts related to the various loan accounts.

Ramakrishna, the principal shareholder of Karuturi Group, said it is in the interest of justice that their case be certified as urgent and be heard on a priority basis.

He said no prejudice will be suffered by the receivers if prayers sought are granted.

On May 9, 2012, CFC Stanbic Limited sanctioned and agreed to advance Karuturi Limited a banking facility including a term loan, overdraft facilities amounting to USD6,590,000.

The facilities were secured by a charge over parcels of land and other equipment. The securities were also being held by ICICI Bank Limited (India) on an equal footing basis to secure a sum of USD40 million.

A winding-up petition was filed against Karuturi Limited on August 7, 2013, by Allpack Industries Limited, culminating in a winding-up order made on March 30, 2016, and an appointment of liquidators.

The dispute related to the facilities has been subjected of litigation in various different courts.

In July, the Supreme Court gave Stanbic Bank a go-ahead to sell the assets of the farm in a bid to recover the loan.