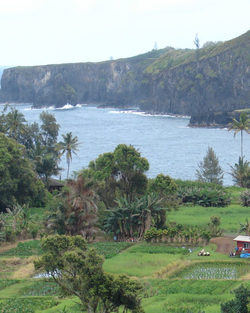 Responsible Markets | 6 April 2021
Case study casts doubt over ESG claims of Canadian pension fund PSP’s major agriculture investment on Maui, calls for greater scrutiny into the community impact of investments
Responsible Markets today published a case study of an approximately $600 million investment that the $135.59 billion Public Sector Pension Investment Board (PSP) is making in a former sugar plantation in Maui, Hawai’i. The report found evidence that the Montreal, Canada based pension plan, which invests its capital through PSP Investments, is not living up to its own environmental, social responsibility, and corporate governance (ESG) principles, resulting in adverse impacts on Maui’s environment and residents.
The study entitled “From the Mountains to the Sea: When Big Money Moved in on Maui’s Agriculture” takes a comprehensive look at Mahi Pono LLC, capitalized by PSP. Mahi Pono was created in December of 2018 under management of Pomona Farming, a subsidiary of the California based private equity firm Trinitas Partners. It now owns and operates over 41,000 acres of farmland in Maui’s central plains, which it acquired from long-time plantation owner Alexander & Baldwin.
Among Responsible Markets’ findings is that the success of the Mahi Pono investment is dependent on securing water rights at exceptionally low rates, at a direct economic and cultural cost to the indigenous Hawaiian people, and on the continued diversion of water away from East Maui, a practice that undermines Hawaiian farming communities. Rather than creating local food security as the company has promised, the Mahi Pono business plan is dependent on export crops. Additionally, the company operates secretively and with little transparency, and has failed to generate the number of jobs promised.
“Through Mahi Pono, PSP is seeking to profit by exploiting the resources of the Hawaiian people,” said Shay Chan Hodges, a co-organizer of Responsible Markets’ initiative, the Maui ESG Project, and co-author of the report. “This is not an ESG investment; it is merely a new version of the extractive practices of plantation capitalism that have been so damaging to Maui’s culture, environment, and economy for over 100 years.”
“The Mahi Pono case study illustrates the importance of early community engagement and ongoing partnership in land-based investing,” says Delilah Rothenberg Founder and Executive Director of the Predistribution Initiative, a multi-stakeholder effort to improve investment structures to share more wealth and influence with workers and communities, and ultimately address systemic risks including income inequality and climate change.
“With capital flows that are so intermediated, meaningful relationship development is often overlooked by distant investors – even asset owners and allocators who are taking measures to integrate ESG. Yet this lapse jeopardizes investors’ returns and perpetuates legacies of colonialism, with foreign powers undervaluing the risk that locals take and the value they offer with their land, resources, and labor,” concluded Rothenberg.


“Large private market agricultural land acquisitions in Hawai’i are all too familiar – wealthy investors parachuting in, missing a golden opportunity to ‘build back better’ for all impacted community stakeholders,” says Lisa Kleissner, impact investment pioneer and co-founder of Hawaii Investment Ready. “While access to water is the hook in this report, the water issue serves to underscore the lack of alignment between Mahi Pono’s objectives and the community’s needs. This report comes to the rescue by laying out in clear, pragmatic terms how Mahi Pono LLC and, for that matter, any private investor in agriculture can move investor/community discourse to a new, mutually beneficial level. First, ancestral rights must be acknowledged and addressed. And secondly, the business and financial model must demonstrate evidence-based community-aligned economics.”
The report shows how investors use the language of ESG and impact investment to promote, and invest in, economic opportunities that do not necessarily have a net positive ESG benefit. Responsible Markets calls on PSP and its staff to meet directly with community members and other stakeholders on Maui to understand the problems Mahi Pono is causing as well as the missed opportunities for positive transformative investment. True community intelligence is invaluable and cannot be outsourced to investment managers and advisors.
Download the full study
---

A Canadian pension fund and its private equity partner come under fire.
by Julie Segal
Canada’s PSP Investments, which invests for the Public Sector Pension Investment Board, is under fire for greenwashing a sustainable investment in Hawaii.
Responsible Markets, a 20-year-old consulting firm in Hawaii focused on the environmental, social, and governance impact of investments, has published a detailed case study arguing that PSP’s $600 million investment through a joint venture called Mahi Pono in a former sugar plantation in Maui, Hawaii is not in accord with PSP’s own ESG standards.
The findings from the year-long research project comes as a critical mass of pensions, endowments, and other institutions publicly commit to investments that meet comprehensive ESG and sustainability goals as well as financial returns. Asset managers, especially those in the U.S, are scrambling to keep up.
The allegations of greenwashing illustrate the complexity of sustainable and ESG investing, particularly when external managers are used.
Mahi Pono, a farming venture between the Public Sector Pension Investment Board and Pomona Farming, a subsidiary of private equity firm Trinitas Partners, purchased the 41,000 acres of farmland in Hawaii in December 2018. At the time, PSP said that, among other things, the deal would ensure that the land would continue to be used for agriculture, that green space would be preserved in Central Maui, and that the acreage would be a long-term source of revenue for the local economy. The project was also intended to create food security for residents and local jobs.
But Responsible Markets argues that Mahi Pono depends on securing water at rates that are exploitative to indigenous Hawaiians and diverts water from local farmland.
“Rather than creating local food security as the company has promised, the Mahi Pono business plan is dependent on export crops,” wrote Shay Chan Hodges, a co-organizer of Responsible Markets’ initiative, the Maui ESG Project, and co-author of the report. “Additionally, the company operates secretively and with little transparency, and has failed to generate the number of jobs promised.”
According to the report, called “From the Mountains to the Sea: When Big Money Moved in on Maui’s Agriculture,” PSP Investments and its external manager use the language of ESG and impact investments, but the results haven’t yielded benefits in line with that narrative.
Ryon Paton, president of Pomona Farming and Executive Chairman of Mahi Pono, said the project is enormously complex and still in its infancy. For example, the project involves investing $30 million to upgrade an old gravity-fed water system that was in disrepair. “The overarching goal is to provide clean foods to the local Hawaiian market and for export,” he said. Paton added that rates paid for water are determined in a public forum and the manager has filed an environmental impact statement. The manager is now in the process of responding to 500 comments it has received from the public. “The long-term lease rationalization process is public and anybody can bid on the right to the water. We don’t negotiate that directly,” he said.
Responsible Markets wants PSP to meet with the community in Maui to understand the problems that the project is causing, as well as what it calls missed opportunities. It also lays part of the blame on PSP’s engagement of an external manager. “True community intelligence is invaluable and cannot be outsourced to investment managers and advisors,” according to the report.
The case study alleges that Trinitas has a history of making questionable sustainable investments, particularly when it comes to water. According to the report, “Trinitas Partners and their affiliates have shown themselves to be masters of sustainable investment rhetoric, [but] the on the ground realities of their agricultural investments show a much more complex picture.” The case study outlines a deal that the partners executed in California, which converted land from vineyards and other crops into almond farms. Almond farming has become a hot button issue in California as these farms use significant amounts of water. Paton stressed that its orchards in California have received the highest level of sustainable certifications.
“Capital markets have become so intermediated that it’s difficult for investment professionals within a large institution to understand what’s happening on the ground,” Delilah Rothenberg, founder of Development Capital Strategies, an advisory firm specializing in sustainable and responsible investment, told II. “A lot of investors do hide behind the excuse of using external managers until there’s enough of a backlash where they have to address the issues,” she added. Rothenberg isn’t familiar with PSP’s Maui investments and couldn’t comment on the case study in particular.
Original source: Responsible Markets
TWITTER
FACEBOOK
WHATSAPP
PRINT
E-MAIL
TWITTER
FACEBOOK
WHATSAPP
E-MAIL