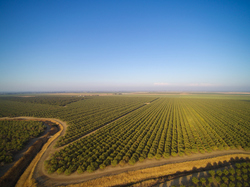 Australian fund manager Laguna Bay, as trustee of Adveq Almond Trust 2 (AAT2), announced it has agreed to sell the largest almond portfolio in Australia to Canadian pension giant Canada’s Public Sector Pension Investment Board (PSP Investments) for more than A$350 million (US$239 million).

As a specific purpose funds group, Laguna Bay is a full-service management vehicle that offers institutional investors exposure to agriculture, and assumes responsibility for both assets and operational management. Under this mandate, the group has established a diverse range of contracts, creating a positive reputation in the agricultural industry, and offering access to a proprietary deal flow of off-market opportunities for investors.

Laguna Bay, the lead investor Schroder Adveq, and a consortium of institutional investors originally acquired the portfolio from Olam in 2013 for A$200 million (US$137 million) through a deal structured as a buy and long-term lease back arrangement, by which Olam continued to operate the orchards.

The premium reflected in the sale of this portfolio to PSP Investments for well over A$350 million is significant for the industry and for ag investors, said McGavin, telling GAI News, “What is relevant for our industry is the extent of the net cash distributions that have been returned to shareholders during the holding period which were well over a third of the invested capital.”

“This is a good example that agriculture is not just about capital gains, there are strong cash flow returns if the manager gets it right.  It is important to emphasis that the returns are usually made by getting the entry price right which is what Laguna Bay is most proud of in this outcome.”

PSP Investments has been doubling down on capital commitments in Australia’s ag sector – and particularly in almonds and water recently. This strategy aligns with intentions for the pension fund laid out in its 2017 Annual Report, which outlined that in FY2017 the pension’s natural resources portfolio generated record investment income of nearly $500 million, driven primarily by cash flows and valuation gains from its agriculture and timber investments.

In October, the pension fund agreed to have its wholly owned subsidiary PSP BidCo acquire all shares not already owned in Australian agribusiness Webster through a deal valuing the company at $854 million (US$578.2 million).

Webster has grown to become the largest producer of walnuts and one of the largest irrigated farming operations in the southern hemisphere. Since its founding, the company has grown to have three main pillars:

Walnuts and Almonds – Webster controls walnut and almond operations across New South Wales and Tasmania, and is the largest producer of premium in-shell and kernel walnuts in the southern hemisphere, supplying approximately 90 percent of Australia’s walnuts.

Agriculture – The company is also the largest irrigated farmer in Australia with 40,000 fertile, irrigated hectares of cotton, corn, and cereals, as well as livestock and dorper sheep operations, and an apiary business in New South Wales.

Water – After its takeover of the Tandou farming and water trading business in New South Wales in 2015, Webster owns a portfolio of more than 200,000 megaliters of water entitlements that support the diversity of its operations and provide the company with a competitive market advantage.

Then, just days ago, it was announced that PSP Investments agreed to acquire 89,095 megaliters of permanent water rights from Olam Orchards Australia (OOA), a wholly owned subsidiary of Olam International, for A$490 million (US$332.5 million).

Both of these deals come on the heels of a positive year for PSP Investments. For the fiscal year ending March 2019, the pension fund ended with AUM of $168 billion – an increase of 9.7 percent year-on-year. The manager also posted a one-year total portfolio net return of 7.1 percent, and a 10-year annualized return of 10.7 percent on its investments, generating $90.1 billion in cumulative 10-year net performance income and $48.8 billion of cumulative net investment gains above its return objective.

– Lynda Kiernan is Editor with GAI Media and daily contributor to the GAI News and Agtech Intel platforms. If you would like to submit a contribution for consideration, please contact Ms. Kiernan at [email protected]com.