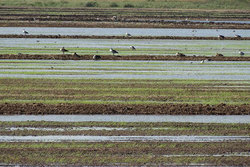 The takeover of Yala swamp in Siaya County, which was announced recently, has run into fresh controversy after Ugunja MP Opiyo Wandayi issued new conditions to the new investor.
The takeover was announced through a Gazette notice that gave Lake Agro Limited absolute control of the vast land.
American firm Dominion Farms Limited, which had a 25-year lease to use the Yala swamp, officially handed over the lease to Lake Agro in a notice issued on January 13.
The notice, which was signed by the legal counsel of the two entities, indicates that Dominion Farms, which initially occupied the land measuring 3,700 hectares within the swamp, will, subject to fulfilment of certain conditions, surrender the lease to Lake Agro Limited, which is linked to the Rai family.
FULL RESPONSIBILITY
Lake Agro will now assume full responsibility to carry on with their business on the same parcels of the swamp land.
Among the conditions set out in the notice was that all the debts and liabilities owed by Dominion Farms will be met by the American investor.
"Lake Agro Limited will not assume, nor will it intend to assume, any liabilities whatsoever incurred by Dominion in the business up to the date of transfer," the notice reads.
The group, owned by Calvin Burgess, stopped operations in the expansive swamp land on November 10, 2017 following a row with the local community.
The decision rendered over 350 of its staff jobless.
WARNING
But, speaking over the weekend, Mr Wandayi warned that Lake Agro Limited will not be allowed to harvest cane from the swamp until a sugar factory is established there.
"We won't allow the investor to grow sugar cane in the swamp land, a resource that belongs to Siaya, and transport the raw material all the way to Kakamega," he said.
The MP said he is aware that the company, through its subsidiary West Kenya Sugar, was given approval to establish a factory by the now defunct Kenya Sugar Board several years ago, and wondered why it is yet to do so.
"We want the factory to be established immediately as a condition to allow the investor to move into the swamp so that our youth can get jobs," he said.
ROAD
The MP also accused the investor of destroying the upgraded Siaya-Rang'ala road by transporting cane to Kakamega using heavy trucks.
"The roads were built following an uproar from us leaders and, when they are destroyed, the people who suffer are the residents of Siaya," he said.
The legislator vowed to ensure the trucks ferrying cane harvested from the swamp do not pass through his constituency.
The new twist adds to the many false attempts by past investors to exploit the potential of the sleeping giant.
Mr Burgess, who had occupied the swamp land growing rice, sugar cane and rearing fish for close to 15 years, complained of frustration by local politicians who, he said, made it difficult for him to continue doing business in the area.
Former employees of the farm allege that Dominion owes them over Sh350 million while a further Sh900 million is due to suppliers.
TRANSFER LEASE
Early last year, Siaya County government tabled a request by the investor to be allowed to transfer the lease, which it had been given by the now defunct Siaya and Bondo county councils, to the incoming investor.
During debates, ward reps demanded that the investor implements the entire report of the assembly by first resurveying the expansive swamp land and adopting the recommendations of the land use plan.
The MCAs also demanded that the MoU that was entered into earlier between the American investor and the former local authorities be renegotiated to include the setting aside of at least 5,000 hectares of the swamp land for use by the local community.
IMPLEMENT RECOMMENDATIONS
Last week, the Central Alego MCA called on Governor Cornel Rasanga’s administration to speed up implementation of the recommendations.
He also called on the new investor to put up a sugar factory in the county before starting full operation.
“We also want the workers to be paid what is due to them. Accrued land rates and rent must also be recovered as well as the money owed to suppliers,” he said.
In September 2019, locals living around the swamp embarked on a fresh bid to have the area registered as community land.
The locals argued that the move would ward off cartels positioning themselves to benefit from the ongoing surveying of the swamp land ordered by the National Land Commission (NLC).
The drive followed a directive in April 2019 by NLC which ordered a fresh survey of the swamp by the county government.