Is nationalisation and state custodianship of land a solution? The case of Mozambique 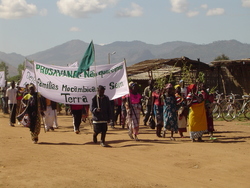 “Mozambican families without land”: the attainment of democratic rights – including the right to access, control and defend land – must be defended and advanced through everyday struggles.
Amandla! | August 2019


Is nationalisation and state custodianship of land a solution? The case of Mozambique


AFTER TEN YEARS OF THE liberation war against the Portuguese colonial regime, Mozambique ended the colonial system of land tenure, access and management, and nationalised all land. The Mozambique Liberation Front, Frelimo, introduced a socialist economy, based on the nationalisation of industry, state-controlled land reform, and a heavily supported social sector, including education, health and housing.
Land as state property

THE FIRST CONSTITUTION OF THE Republic of Mozambique establishes agriculture as the basis for the development of the country. The state is responsible for guaranteeing and promoting rural development, in accordance with the needs of the people and the socio-economic progress of Mozambique. According to the Constitution, land became state property and it “cannot be sold, or otherwise alienated, mortgaged or seized”. This means that, in theory, there are no commercial/financial values attached to land access.
As a universal means of creating wealth and social welfare, access to land was established as a right of all the Mozambican people.

The 1979 Land Law, which gave the state and Frelimo power over land management and decision making, was changed and a new Land Law came into effect in 1997. Mozambique was a single- party state from 1975 to 1994, when the first multi-party elections took place. Under the first land law (1979) foreign private capital investment in agriculture and other land uses was not possible, although there were cases of power abuse, corruption and expropriation of peasant farmers.
The country experienced a 16 year civil war, from 1977 to 1992, involving the National Resistance of Mozambique, Renamo (a former guerilla/militant organisation, now an opposition political party) and the Frelimo/state armed forces. Although the war had local dynamics, it was exacerbated by polarising effects of the Cold War. While Frelimo received support from the Soviet Union, Renamo received support from the CIA. National politics then had great influence in land dynamics and rural politics more broadly.

According to the anthropologist Bridget O ́Laughlin, there were three main phases of agrarian transition until the end of “socialism”:


“The first phase, from 1975 to 1980, was defined by broad-ranging political consensus around the need for a rapid socialisation of production and residence through the expansion of state-farms, co-operatives, and communal villages. The second highly contradictory phase, from 1980 to 1983, was defined by Frelimo’s shift to a bureaucratic and hierarchical model of rapid socialist accumulation based almost exclusively in state farms. Starvation in rural areas, the stagnation of state farm production, and widening support for the Renamo opposition movement from South Africa (amongst others) led to a rapid expansion of both the war and parallel markets in rural areas. Frelimo’s strategy in the third phase, beginning with the Fourth Frelimo Party Congress in 1983, was initially defined as market socialism, but moved rapidly towards increased support for private commercial farming, and the distribution of some state farmland to multinational enterprises, Mozambican commercial farmers and some peasant households”.


The post-socialist land law
OFFICIALLY, THE 1997 REVISION OF THE 1979 Land Law was in order to adapt
it to the new political, economic and social situation. It was to guarantee access to and security of land, both for Mozambican peasants and for national and foreign investors. This went hand in hand with the adoption of neoliberal policies promoted by the Bretton Woods Institutions, namely the World Bank and the International Monetary Fund.

Together with these institutions, there were many forces pushing for land privatisation, i.e. market intervention in land access and management. But this was strongly opposed by the counter forces of the “Land Campaign” . This was a dynamic and highly participatory process, with contributions from various sectors of Mozambican civil society. The participation of the Mozambique National Peasants Union(UNAC) in the campaign was very crucial. As a result, state ownership of land remained unchanged in the new law, although it opened up possibilities for private capital to penetrate.

Foreign investors were allowed to invest in the agricultural sector (and others, including mining, etc.). This was permitted on the assumption that such investment would facilitate quick mechanisation of agriculture, rural industrialisation and, therefore, the resolution of
the agrarian question. But that did not take place in the short- or medium-term, since the conditions for the massive creation of employment, industrialisation and urbanisation of society were not created. The peasantry did not transit to a full proletarianisation. They remained either precarious agricultural workers or “semi- proletarians”. Semi-proletarianisation is the process of combining wage labour and other activities, such as farming for economic subsistence. As Sam Moyo and Paris Yeros put it: “semi-proletarianised peasants struggle for a living against richer peasants, large-scale commercial farmers, and other employers who hire semi-proletarians at wages below the cost of social reproduction.”

How to access land
INDIVIDUALS AND COMPANIES CAN access land by acquiring the right to use and benefit from the land. This is known as Direito de Uso e Aproveitamento da Terra (DUAT). Local individuals and communities can access rural land through customary norms. So, in accordance with customary norms, any individual or community that has stayed in and used land for at least ten years in “good faith” has a natural right of use. To a certain degree, these norms have legal status, as they are established by the law. However, they can be manipulated, disregarded or simply ignored, as we will see later.
The concession of a DUAT is free of charge and for life for peasant farmers, cooperatives and local peasant associations. According to the law, the absence of a written DUAT title does not prevent them from exercising their customary rights.

Foreigners – and national investors – have to acquire a written DUAT title, through a number of procedures,including consulting members of the communities in which the land is being requested. In such cases, the state issues and reserves the right to withdraw the DUAT title. All DUATs and land use can also be withdrawn for reasons of public interest. For purposes of economic activity, the DUAT is granted for 50 years, renewable for an equal period at the request of the interested party. DUAT fees are “symbolic”, therefore very low.
Why land grabs?
FIRST, WE HAVE TO UNDERSTAND THE formation of a national capitalist class.
In order to have access to Mozambican resources and markets, international capital needed a compliant domestic capitalist class. No such class existed, so there was a need to create it. “Privatisation” of the state was a necessary condition for the process of capital accumulation and the creation of local oligarchies. From generals to top politicians and lobbyists, a small number of individuals reaped benefits from the privatisation of state enterprises, banks and services. This was also true in the natural resources sector. Fertile farmlands and mines were appropriated, in most cases from the peasantry.
In the whole economy more broadly, this has led to a kind of porousness. According to the economist Nuno Castel-Branco, there has been an inability, deliberate or not, to retain the uncommitted surplus that could be used for the reproduction of the economy as a whole. In other words, elites capture the state in order to generate surpluses. These surpluses are then financialised, either in domestic capital markets, or, more often, in international capital markets. Of course this also results in capital flight.


In land access and use, the “progressive” land law has been breached or manipulated. Traditional or community leaders have been coopted and fake community consensus and agreement has been fabricated to allow capital to penetrate. Over the last decade, land conflicts have got worse and the number of dispossessed peasanty has been increasing.

In Nampula and Zambezia provinces of Northern Mozambique, family agriculture was replaced by industrial monocrops of soya. One agribusiness company that dislocated hundreds of peasant families has connections with a former president and other political elites.
Reclaiming the state, intensifying the struggles

IN MOZAMBIQUE, AGRARIAN MOVEMENTS – and organised civil society more
broadly – have been fighting to defend the current land law, even though it can be manipulated by elites. What emerges from this discussion is the need to reclaim the state and make it more progressive and work for the people.
The other element to highlight is that the attainment of democratic rights – including the right to access, control and defend land – must be defended and advanced through everyday struggles. Laws and policies on their own won’t make significant change. Elites always threaten to capture progressive policies.
Original source: Amandla!
TWITTER
FACEBOOK
WHATSAPP
PRINT
E-MAIL
TWITTER
FACEBOOK
WHATSAPP
E-MAIL