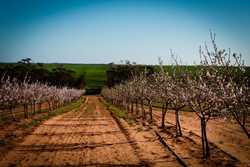 The acquisition of Australian farms by cashed-up foreign investors has been a sensitive issue in recent years, with many local farmers unable to compete amid a surge in rural values.
AFR | 22 July 2019

by Larry Schlesinger
Foreign ownership of Australian farmland is "overstated" when measured on a dollar-value basis, according to a new report by agribusiness lender Rabobank.
While Rabobank found that 13 per cent of Australian farmland by area has some form of foreign ownership interest - in line with the most recent figures reported by the federal government's Agricultural Land Register - by value this figure almost halves to just 7 per cent.
"Focusing on land area ... overstates the extent of foreign ownership of agricultural land," said the bank in commentary on its latest report.
According to Rabobank's Agricultural Land Price Report, Tasmania has the highest level of foreign farmland ownership by value (40 per cent) ahead of the Northern Territory (just under 30 per cent), Queensland and WA (both just over 10 per cent).
Victoria - at about 2 per cent - has the smallest percentage of foreign-owned agricultural land by value, with South Australia and NSW/ACT all also below 10 per cent on a value basis.
By commodity type, the report found that foreign investment is most prevalent in Australia’s horticultural industries (crops such as almonds, citrus and grapes), with foreign interests accounting for 36 per cent of this sector by area and 23 per cent by value. 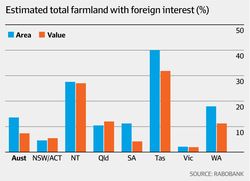 The next-biggest sectors are livestock and crops, with foreign interests accounting for about 8 per cent of ownership by value and similar levels of ownership by area.
The acquisition of Australian farms by cashed-up foreign investors has been a sensitive issue in recent years, with many local farmers unable to compete amid a surge in rural values.
Since 2015, foreign investors have been required by law to register their interest in agricultural lands, while last year new rules kicked in requiring the public advertising of farms worth $15 million or more in a move aimed at giving local buyers an opportunity to compete for properties.
"Foreign investment is heavily weighted towards livestock production [coming in at 96 per cent by area]," said Rabobank agricultural analyst Wes Lefroy.
“Pastoral grazing land is however of less value compared with other production types such as cropping and horticulture,” he said.
Mr Lefroy said foreign and corporate investment, rather than family farms, has tended to be more focused in on horticultural production, "underpinned by positive outlook in permanent crops and the scale and high capital costs involved in some of the new developments".
The most recent Agricultural Land Register figures published by the Foreign Investment Review Board show foreign investors increased the size of their Australian agricultural land holdings by 4.1 per cent to 52.6 million hectares in the 12 months to June 2018, with Britain, China and the US the top-three largest holders.
Earlier this year, WA's biggest grain grower, John Nicoletti, sold his 200,000-hectare wheat and wool portfolio in the state's eastern wheatbelt region to the Saudia Arabian government for about $65-$70 million.
Mr Nicoletti defended his decision to sell to the Saudi Agricultural and Livestock Investment Company, saying local investors had shown little interest in buying the massive aggregation.
At the same time, some foreign owners such as China's Rifa Salutary are quitting Australia.
Rifa put its entire beef and lamb business, including 44,000 hectares of production land, up for sale this month after swinging to a big loss in the past year due to drought.