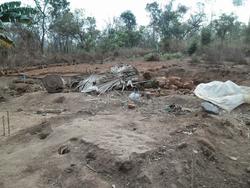 The forcibly displaced farmers of Kamsisomwa, Tanzania have launched a crowdfunding campaign to pay for legal support.
REDD Monitor | 6 April 2018

Lord writes of a “carbonization” of forest governance, and notes concerns that a “strong focus on performance-based payments … would simplify the complex aspects involved in implementing co-benefits on the ground”.
The dynamic boundary conflicts that ultimately led to the violent evictions, “remain illegible to carbon’s global gaze”, Lord writes.
Free Prior and Informed Consent: “A sophisticated box ticking exercise”
REDD in Tanzania builds on the governance arrangements developed through Participatory Forest Management, using village-level political structures.
A CIFOR report about the Jane Goodall Insitute’s REDD project states that, “JGI began disseminating information and carrying out the FPIC process at the beginning of 2010.”
Lord describes the process as a “two-week consultancy commission”, that “amounted to little more than a sophisticated box ticking exercise”.
Elite capture and parallel governance
The project created an “incentive fund” of US$200,000 to fund village-level infrastructure (the five schools and two village offices mentioned above) and to set up an inter-village Community Based Organisation to provide conservation education and forest protection.
Five members from each village were selected from the Village Environmental sub-Committees, created under previous conservation projects. Lord comments that, “This could be regarded as a form of elite capture because they selected the wealthier members of the village.”
Conservation education consisted of training on governance and REDD for the members of the Community Based Organisation, which they then explained to the rest of the village. The project also offered training on replacing charcoal making and other forest degrading activities with beekeeping, poultry management, and agricultural activities.
Villagers had to buy beehives themselves, which they couldn’t afford. Even successful beekeeping groups reported only low returns.
Forest protection involved forest surveillance and patrols. The Community Based Organisation set up about five local informants in each village, who reported on forest activities. There were seven Voluntary Forest Monitors in each village, three under the REDD programme and four under the conservation programme. They received military training but were not authorised to carry firearms. The Forest Monitors recorded animal sightings and human activity in the Masito forest, using GPS to record the information.
Joint patrols took place every six months. For these patrols, the Forest Monitors were joined by District Natural Resource Officers, Park Rangers, and police. Lord writes that, “This parallel authority undermined the political power of the democratically elected local chairman to represent the interests of the villagers and respond to their demands.”
“In effect,” Lord writes, “the CBO was a parallel institution to the village government because they responded to the international NGO [Jane Goodall Institute]. The incentive structure provided by REDD+ exaggerated this power discrepancy, through the provision of capital.”
The REDD project’s decisions were “authoritarian”
A 2008 participatory Land Use Planning process was supposed to have reached consensus on village and forest boundaries. But the REDD project took a different approach. The Community Based Organisation secretary was present when the REDD project boundaries were demarcated. He explained the process to Lord as follows,
what I saw, there were the maps of a long time ago from the district council. Because the maps were there and the maps use longitudinal and latitudinal. So we were just going there and using GPS, that means me, [REDD+ Project team member] was experienced using the GPS and the GPS were helping us in locating where the border was supposed to be, according to the maps that were already drawn.
Farmers in the area did not accept this REDD boundary. But the Forest Monitors believed their version of the boundary to be correct. Lord notes that,
This clearly indicates the power relations between the NGO, CBO and FM determining public domain in this land and how these relations are being contested. The use of technology heightens these inequities. Only experts have access and the knowledge to define the coordinates. As the REDD+ project team are only present within the study location for a very limited time, their decisions are essentially authoritarian.
The Jane Goodall Institute had hoped to finance the project from sales of carbon credits. The contract between the Norwegian Ministry of Foreign Affairs and the Jane Goodall Institute explains that,
It is estimated that greenhouse gas emissions from deforestation and forest degradation will be reduced by an average annual amount of 55,000 tCO”eq, and that the forest management community-based organization will generate an annual net income from the sale of carbon credits totalling $400,000.
No carbon credits were sold and money from the Norwegian Embassy in Tanzania to the Jane Goodall Institute’s REDD project dried up in 2013.