US: Large Washington tree fruit companies compelled to sell out 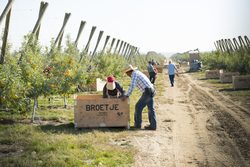 Broetje Orchards, which produces 7 million boxes of apples a year on 6,175 acres, was purchased by the Ontario Teachers’ Pension Plan.
Growing Produce | 12 February 2018

Large Washington tree fruit companies compelled to sell out
By David Eddy
Two of Washington’s largest tree fruit companies have changed hands this past winter, as operators reportedly began to realize the operations would need large capital infusions to renew older orchards and remain competitive. Even a resident of coastal Washington, Microsoft co-founder Bill Gates, has taken a sizeable interest in the fruit industry on the other side of the Cascade Range.
The largest sale was the purchase of Broetje Orchards from founders Ralph and Cheryl Broetje by the Ontario Teachers’ Pension Plan, which was recently reported by the Yakima, WA, Tri-City Herald.  Reportedly one of the largest privately-owned orchards in the U.S., it produces 7 million boxes of apples a year on 6,175 acres.
The total purchase price of the deal, which closed in late December, has not been disclosed, but according to the Tri-City Herald, the real estate part of the sale was valued at $288 million. The deal covers Broetje’s orchard properties, FirstFruits Marketing of Washington LLC and Snake River Housing Inc.
Broetje, the 2003 winner of American Fruit Grower® and Western Fruit Grower® magazines’ Apple Grower of the YearSM award, reportedly employed nearly 3,000 people at harvest.
If the Broetje sales figure is correct, it would be the highest priced land sale in the U.S. in 2018, eclipsing yet another purchase of Washington farmland. Gates paid $171 million in August to acquire approximately 14,500 acres of highly productive farmland in Southern Washington from John Hancock Life Insurance Company, according to The Land Report.
Tax records indicate that John Hancock paid $75 million to acquire the farmland in 2010, the magazine reported. The recent purchase, by Gates’s Cottonwood Ag Management of Kirkland, WA, includes approximately 10,500 acres of irrigated farmland, 3,900 acres of rangeland, and about 140 acres of other land in an area known as Horse Heaven Hills.
Growers in Horse Heaven Hills produce a variety of fruits and vegetables, but the area has become best known in recent decades for wine grapes. The state’s dominant winery, Chateau Ste. Michelle, has two of its largest vineyards in the Horse Heaven Hills American Viticultural Area, Canoe Ridge, and Columbia Crest.
The other large purchase was by International Farming Corporation (IFC) of North Carolina, which announced in late January that it was joining the current owners, the Larson and Verbrugge families, in acquiring Legacy Fruit Packers, Valley Fruit, and Larson Fruit, all of Yakima Valley. The combined companies will be known as Columbia River Orchards.
The acquisition includes 4,000 acres of orchards and two packing facilities which handle 4 million boxes of fruit annually. In a press release, IFC says it intends to expand and develop more acreage in the coming years and will retain the company’s approximately 3,000 full-time and seasonal employees. The purchase also includes the Sage Fruit marketing company of Yakima and Pacific Coast Cherry Packers of Wapato.
IFC CEO Charlie McNairy states that the diversified agricultural investment firm “plans on making substantial investments in orchard and packing technology to produce the highest quality fruit for our customers at Sage Fruit and we appreciate that both families will maintain ownership interests and hold board positions to provide guidance for the new company.”
While the early part of the decade had growers swimming in profits from new varieties such as ‘Honeycrisp,’ they began to see hard times beginning in 2015. With the cost of establishing a modern high-density orchard approaching $60,000 an acre – not including land costs – and packinghouse technology skyrocketing, industry insiders say more sales may be on the horizon.