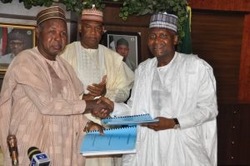 by Agaju Madugba, Katsina
The President of Dangote Group of Companies, Alhaji Aliko Dangote, has acquired the Katsina Songhai Initiative, a multi-million Naira tomatoes production and processing facility.
Under the terms of the MoU, the Dangote Group will invest an initial sum of N500 million and manage the facility for 10 years before returning it to the Katsina State Government.
“We will ensure that the project becomes the bedrock of tomatoes production in Nigeria,” Dangote said, on Thursday, at the Katsina Government House, during the signing of the Memorandum of Understanding (MoU) for the acquisition.
Dangote said he would expand the project and exploit what he called Katsina’s vast arable land for other agriculture initiatives and allied business ventures.
According to Dangote, “Apart from tomatoes, we will do other things here since you have provided us the enabling environment and we will do our utmost best to make you proud as governor of Katsina State.”
In his remarks, Governor Aminu Bello Masari said the project would not only be for the Katsina people alone but for the entire West African region.
In the words of Governor Masari, “The facility will serve the people of West Africa and the entire humanity. We are happy as a government that we have brought something that will add value to the lives of the people here and to humanity in general.
“The project is not only about tomatoes as other businesses and institutions will spring up and we believe that cultivating over 10,000 hectares of land will provide not only for Katsina but for the whole of the West Africa region.
“This government is investor-friendly and we will do whatever it takes to make sure it succeeds as we want to put something in place that will outlive all of us and evidence that we have added value to the lives of our  people and humanity in general.
“The purpose of life is about how we can add value and bring benefit to others. Those who do that are the best among mankind and Alhaji Aliko Dangote is one of them,” the governor said.