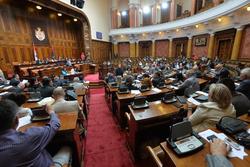 Serbia passes bill cementing limits of land sales to foreigners
by Misha Savic
Lawmakers adopted restrictions against European Union citizens buying arable land in the Balkan country just days before Serbia was to open the market under a 2008 agreement.
In a 131-13 vote, lawmakers passed a bill requiring any EU citizen to live in Serbia for at least 10 years before purchasing land, with plots limited to two hectares. The government said it wants to protect local farmers and prevent foreigners from taking over natural resources. Other foreigners can’t buy any farmland, though foreign companies can through local units.
“Without the restrictions, we would be the only country to open land sales before becoming a member’’ of the EU, Agriculture Minister Nedimovic said when he presented the draft in parliament last week. He said it was in the “national interest’’ to keep agricultural land locally owned, citing measures by other states that are already members or seeking to join.

Serbia signed a Stabilization and Association Agreement with the EU in 2008, accepting a time line to gradually remove trade barriers. Under the deal, made when Serbs thought they would join the bloc within several years, the land market opens on Sept. 1. President Aleskandar Vucic has said he hopes to prepare the country for EU entry by 2020.

Conditions also include that EU citizens must farm land as a lessee for at least three years before buying it, and a seller must first offer it to the state. Land close to military facilities and in national parks can’t be sold at all.
--

Assembly passes amendments to Law on Agricultural Land
The Serbian National Assembly on Monday passed with 132 votes in favor and 13 against a set of amendments to the Law on Agricultural Land.
Beta is reporting that the law allows EU citizens to buy arable land in Serbia, but prevents full liberalization of this market, that would have happened on September 1, when provisions of Serbia-EU Stabilization and Association Agreement (SAA) come into force, that would have equalized the right of Serbian citizens and those from the EU.
Foreigners from EU countries will now be able to buy up two hectares of arable land in Serbia - if they meet legal requirements, which include at least ten years of residence in Serbia - in the unit of self government where the land is located.
They must also have cultivated the land for at least three years, have an agricultural household registered to their name, and own agricultural equipment necessary to cultivate the land.
The amended law prevents foreigners from EU countries from buying agricultural land in the 10-kilometer zone next to the country's borders.
The amendments will go into force the day after they have been published in the Official Gazette, and the law will go into force on September 1, Beta reported, and added that "the opposition warned that the amendments were meaningless, deceiving the public and 'betraying' Serbian national interests, as they made it possible for foreigners to buy agrarian land."
Original source: Bloomberg
TWITTER
FACEBOOK
WHATSAPP
PRINT
E-MAIL
TWITTER
FACEBOOK
WHATSAPP
E-MAIL