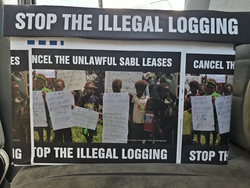 The National Court has ruled a further two Special Agriculture and Business Leases null and void for constructive fraud.

David Mota -V- Albert Camillus and Akami Oil Palm Limited (2014) is the sixth reported National Court decision* in which SABL leases have been quashed for a failure by the State to ensure the informed consent of customary landowners and to strictly comply with the requirements of the Land Act.

Between 2002 and 2011 the Papua New Guinea government issued more than 75 SABL leases covering more than 50,000 square kilometres of land. The leases were the subject of a Commission of Inquiry which found widespread fraud and other abuses.

In 2008, the Minister for Lands and Physical Planning granted 99-year Special Agriculture and Business Leases over two portions of land in the Nakanai area of West New Britain, close to Mt Pago. Image: Areas of oil palm planting can be clearly seen around Mt Pago

Albert Camilus is the sole shareholder and a director in Akami Oil Palm Limited, which changed its name in September 2012 to Akami Development Limited. In the letter accompanying the application to change the company name Albert Camilus wrote his name and signed as Albert Kamilus.

They claimed the circumstances surrounding the granting on the leases to Akamai Oil Palm involved actual and constructive fraud.

NO GROUNDS TO DISMISS THE CLAIM

The first and second defendants argued that the proceedings should be summarily dismissed on three preliminary grounds:

All three arguments were dismissed. The court found:

(c) the deed of release did not apply as it was not executed by most of the plaintiffs.

On the substantive question of whether fraud was involved in granting of the two leases, the first and second defendants denied the allegations. They asserted that the genuine former customary landowners had agreed to their land being transferred, by signing purchase agreements, and had been paid accordingly.

The third, fourth and fifth defendants, the Registrar of Titles, the Departments of Lands and the State of Papua New Guinea did not enter a defence and made no appearance at the trial.

Under Papua New Guinea’s Torrens Title system of land registration the general principle is that once a lease of land from the State, including a Special Agricultural and Business Lease, is registered, an indefeasible title is conferred on the registered proprietor, subject only to the exceptions in Section 33(1) of the Land Registration Act, which include “in the case of fraud”.

In this context, “fraud” means actual fraud or constructive fraud i.e. where it is proven that the circumstances in which a person has obtained title are so unsatisfactory, irregular and unlawful as to warrant the setting aside of title.

In this case the court found the plaintiffs failed to prove actual fraud, but did prove constructive fraud.

Constructive fraud was found proved as:

“none of the elaborate procedures under Sections 10, 11 and 102 of the Land Act for acquisition by the State, by lease, of customary land, and granting of Special Agricultural and Business Leases over such land to third parties, were complied with. This was a case of extensive violation of statutory procedures for transfer of interests in customary land. It was proven that the circumstances in which the second defendant obtained title were so unsatisfactory, irregular and unlawful as to amount to constructive fraud, warranting the setting aside of title”.

The court noted that a strict interpretation of the provisions in the Land Act was necessary “to reflect the cultural, social and economic significance of customary land in Papua New Guinea” and ‘to ensure that leases over customary land are granted only after a thorough identification and investigation of the land and the customary landowners and their agreement to what is proposed’.

“The issue of Special Agricultural and Business Leases has been very controversial in recent years, so much so that the Prime Minister instituted a Commission of Inquiry to inquire into the circumstances in which large tracts of customary land throughout the county have been made the subject of Special Agricultural and Business Leases, many of which are controlled by non-citizen interests”.

The principal relief sought by the plaintiffs was granted; the two leases over Portion 104C and Portion 2628C were declared null and void and quashed.

The Registrar of Titles was ordered to amend the Register of State Leases and all other records of the State under his control to give effect to the declarations.

The first and second defendants were ordered to pay the plaintiff’s legal costs.