LatAm is most murderous region for land, environmental activists: report

LatAm is Most Murderous Region for Land, Environmental Activists: Report 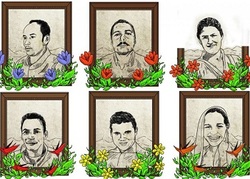 Latin America is the most murderous region for land rights, environmental activists.
Watch Global Witness' Murdered defending their land https://youtu.be/fHGQ9pM7QSU
Latin America is the most dangerous region in the world for activists fighting for their land or trying to safeguard the environment, according to a Global Witness report, which also provides insight into why these defenders are at such high risk.

The year 2016 was the worst year recorded for environmental and land activist murders, according to a worldwide study published July 13 by the nongovernmental organization. Most of the approximately 200 registered killings -- around 60 percent -- took place in Latin America, Global Witness said.

The report makes special mention of Colombia, where 2016 was "by far the worst year on record," for land activists. Paradoxically, the government's peace process with the Revolutionary Armed Forces of Colombia (Fuerzas Armadas Revolucionarias de Colombia - FARC) has increased the risks for land rights activists, it argues.

Billy Kyte, Global Witness' campaign leader on land and environmental defenders, told InSight Crime that this was one of the biggest surprises of the investigation. The main reason for this trend, he said, was probably the return of many displaced persons to their original communities, bringing them into conflict with armed groups involved in exploitation of lucrative natural resources.

Another factor, Global Witness says, is that the Colombian government is using the "post-conflict" climate to encourage more foreign investment into the country, something that has long been associated with extreme violence against local activists who challenge the operations of foreign companies.

In Honduras, foreign investment is also a contributing factor.

"In the vast majority of cases, land and environmental defenders are threatened because they have questioned or opposed a commercial project," the report reads.

Furthermore, foreign investors have continued to bankroll projects despite allegations of associated human rights abuses. One of the more prominent examples from 2016 is the murder of activist Berta Cáceres, allegedly as a result of her opposition to a dam project. Global Witness says the hydroelectric project for years received funding by the Dutch Development Bank (FMO) and the Finnish Development Bank (Finnfund), even as activists reported threats and attacks against them.

One of the key issues the report draws attention to is that national governments are exacerbating the problem by not consulting local communities regarding large-scale development projects that often cause displacement and environmental damage.

As negotiation is hardly possible, local communities find their only recourse is protest, exposing them to physical repression.

"Cáceres was only forced to take a stand because the indigenous Lenca people … were never consulted on its development by the Honduran state or the company contracted to build it," the report reads.

Another recurring factor is national governments' inability or unwillingness to protect land activists. These have repressed outspokenness against human rights violations, while passing legislation that favors private interests over those of its citizens, the report claims.

"Many of these projects wouldn't get a go-ahead, if it wasn't for corruption," Kyte said.

Global Witness' report spotlights several developments in the dangers faced by Latin American land activists.First, it reaffirms some of the most critical issues surrounding the implementation of Colombia's historic peace deal: the protection of those that will be left most vulnerable by the withdrawal of the FARC guerrillas. The rebel army was long the only source of security for thousands of rural dwellers. But today communal leaders find themselves in greater danger as they fight to preserve their territory from exploitation by criminal groups, including those looking to impede the restitution of land to displaced persons.It is now up to the government to ensure safety in rural areas. Failing to do so would further hurt public support for an already shaky peace process, and help new criminal gangs consolidate social control. In this regard, the Colombian government is not off to a good start.

As foreign capital flows into the country, the government must also ensure that history does not repeat itself. Several multinationals -- including Coca Cola, Nestlé, and the banana company Chiquita -- have been accused of collaborating with paramilitary groups to protect their operations in Colombia in the past, including eliminating social leaders, union heads and activists who stood in their way.

Greater communal participation in foreign operations on Colombian soil may help prevent these types of abuses. Colombia's natural riches must be left alone until local people are guaranteed security and "are able to make their own decisions on what happens to their resources and to their land," Kyte told InSight Crime. "Until that is in place [the government] should not be promoting investment in those far flung, lawless regions."

In 2017, the idea that multinationals should obtain a "social license" from the local community to implement large-scale projects gained more steam when the town of Cajamarca set a historic precedent by successfully expelling mining giant AngloGold Ashanti following a public referendum against its local project.

Honduras may be taking this one step further with a proposed law on the prior consultation of indigenous and afro-Hondurans on the use of their land. This would reduce the likelihood of public resistance, while helping to guarantee the financial and personal security of locals.

This said, it is also necessary to flag up certain stumbling blocks in collecting data on the murder of activists who have been murdered because of their work. It is not always possible to determine whether or not the killing of a defender is related to their activism, and some of the cases considered in the report were possibly motivated by other reasons, according to InSight Crime research.

That ambiguity -- which Global Witness acknowledges -- can be wielded by those seeking to repress the issue. As Global Witness suggests in the report, government officials at times deny links between the murder of activists and their activism, leaving many to doubt whether any of the attacks are related to their work. This risks leaving this very real danger unaddressed.