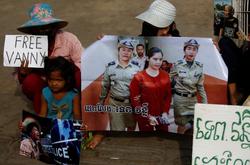 Protesters hold an image of land-rights activist Tep Vanny as they demonstrate in support her, in front of the Phnom penh Municipal Court during her verdict in central Phnom Penh, Cambodia, February 23, 2017. Photo: REUTERS/Samrang Pring

A Cambodian court convicted and sentenced a prominent land rights activist to 2-1/2 years in jail on Thursday for her role in a protest outside Prime Minister Hun Sen's residence in 2013.

Tep Vanny was found guilty of assaulting security guards while trying to deliver a petition to Hun Sen asking for assistance in a long-running land dispute.

Eyewitness testimony that neither Vanny or other protesters were involved in any clash failed to sway Judge Long Kesphirum.

Forced evictions are a major problem in Cambodia, with thousands of families driven from farmland or urban areas to make way for real estate developments or mining and agricultural projects.

"They use this case against me to pressure others," Vanny told Reuters before the verdict. "They use the judiciary to silence me and scare others from protesting."

Hun Sen has ruled Cambodia for three decades, and his government denies accusations by critics that it uses the courts to deter dissent. Cambodia faces local elections in June and a general election next year.

A small group of Vanny's supporters that had gathered outside the courthouse called the verdict unjust and an abuse of power before being dispersed by security guards, a Reuters witness said.