Stolen SABL land would reach all the way to the moon 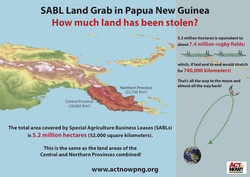 Stolen SABL land would reach all the way to the moon

Fifty two thousand square kilometres of customary land has been
stolen in the SABL land grab.

52,000 square kilometres is the same as 5.2 million hectares - but what does that amount of land really look like?

Well, 52,000 square kilometres is the same as the whole of Central and Northern (Oro) Provinces put together - imagine that: land equivalent to two whole Provinces illegally given to foreign companies!

It is also the same as 7 million rugby fields.

Yup, you could create 7,000,000 rugby fields from the land stolen in the SABL land grab - and if we laid those rugby fields end to end they would reach all the way to the moon and almost all the way back!

Just imagine that, you could walk all the way to the moon on the land stolen in the SABL land grab!

In June 2013, almost four years ago, a Commission of Inquiry found the SABL leases had been illegally issued and recommended they be cancelled and land given back to customary landholders.

But what has been the government’s response to this huge illegal theft of customary land?

Zip, nothing, nill. Not one lease has been cancelled by the government.

Who is our government working for? For us, the people of PNG, or the foreign companies who have stolen our land?