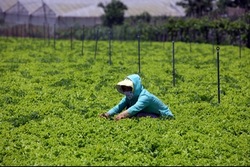 The Miyazaki Prefecture-based Kushima AoiFarm has begun production in Vietnam of Japanese sweet potatoes, known for their high sugar content and which are popular in Hong Kong and Taiwan.

With production technology transferred from Japan, it saw first-year output of 1,250 tons and exported to Singapore and Hong Kong.

The crop will be supplied to local Japanese restaurants, which are increasing in number. The company is also looking to export to China, according to an official.

In an interview with VET, Dr. Mayu Aizawa, an agriculture engineer with the Tsuno Food Industrial Co., said that the company plans to build a rice bran oil plant in Vietnam.

“While Japan’s rice production is falling, Vietnam’s has developed strongly,” she said. “Knowing that the Vietnamese Government is making efforts to support enterprises that contribute to the development of the agricultural processing industry as part of the country’s industrialization strategy, our company wants to contribute to the development of Vietnam’s agriculture, to help improve the incomes of farmers by effectively utilizing rice bran.”

Mr. Nguyen Do Anh Tuan, Head of the Institute for Policy and Strategy for Agriculture and Rural Development, told local media that Japanese investors have already been seeking opportunities to invest in hi-tech farming.

“Vietnam and Japan see great opportunities for agricultural cooperation, especially after signing a number of bilateral and multilateral free trade agreements,” he said.

At a meeting on February 8, Prime Minister Nguyen Xuan Phuc lauded the coordination by the Japan External Trade Organization (JETRO) with Vietnamese agencies in preparation for a program that calls for Japanese investment in Vietnam in the first half of 2017, the Vietnam News Agency (VNA) reported.