Selling Africa by the pound 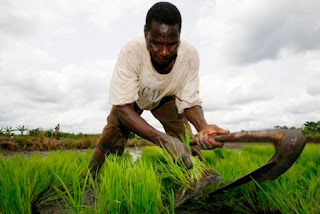 The announcement by a U.S. investor that he has a deal to lease a swathe of South Sudan for farmland has again focused attention on foreigners trying to snap up African agricultural land.

A few months ago, South Korea’s Daweoo Logistics said it had secured rights to plant corn and palm oil in an even bigger patch of Madagascar - although local authorities said the deal was not done yet. Investors from Asia and the Gulf are looking elsewhere in Africa too.

Investor interest in farmland – not only in Africa – grew sharply after food prices shot to record highs last year. Although commodity prices have fallen since, there is still anticipation of long term demand growth once the world emerges from its current economic troubles.

But should Africa be handing out its land to foreign investors and will the local people and countries involved be the ones to benefit?

This commentary in the Financial Times made comparisons with the colonial grab for Africa’s resources and points out the damaging legacy that remains.

“There is a need for investment if the continent’s full agricultural potential is to be achieved. At a time of growing shortages, there is also an obvious need for African governments to prioritise domestic supplies. If the continent is to avoid repeating history, the big deals and speculation should come later,” it said.

Is it wise to discourage such investment, though, if investors are willing to bring big money to put the land to more efficient use than is currently the case? While some areas of Africa are densely populated and every scrap of ground is farmed, other hugely fertile areas are barely used.

Investors argue that they can bring jobs long term and will improve local infrastructure - perhaps more so than if they were taking land for less emotive mining or oil concessions - as well as increasing food supplies and foreign exchange earnings. Elsewhere in the world, mechanised agriculture and bigger farms have led to major productivity increases - although environmentalists argue they can cause damage too. Despite their best efforts, African governments have not always proven themselves the best at managing agricultural resources. Might Africa miss out on development that has helped fuel broader economic growth in countries such as Brazil?

Land ownership could also prove contentious. In the distant past, it was often held by communities as a whole or vested in traditional authorities. State officials now often have the greatest say. That opens the potential for official abuse of yet another valuable resource. Since governments can come and go unpredictably that also means an increase in risk for investors and can only be a further encouragement to cut costs for a quick return.

Heilberg said Jarch felt comfortable investing in Mayom and that the local politicians and population would be accepting of the investment.

“With risk, you have to look at risk and reward together - this is why we pick our areas very carefully,” he said.

So is major foreign investment in land a danger to Africa or is it an opportunity that the continent cannot afford to miss? Is there a way of making it work for everyone’s benefit? What do you think?