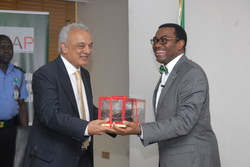 Why Triton agric investments’ll create jobs, reduce poverty
As Nigeria cashes in on the investment opportunities of import substitution, critical investments have been made by the Organised Private Sector (OPS), one of such being Triton farm projects on fish, poultry and crop production.
Undoubtedly, the scale of the company’s investment will create jobs, reduce poverty as well as aid the quest to meet the protein requirement of the Nigerian market. The company has already created about 400 jobs for Nigerians within one and half years of its investments in aquaculture, poultry and crop production.
Triton’s aquaculture investment, which covers a total of 5,000 acres at Gambari, in Oyo State, is set to provide all round benefits to the Nigerian economy through value-focused productivity.

Speaking at the inauguration of the farm projects recently, Minister of State for Agriculture and Rural Development, Heineken Lokpobiri, said: “I am very happy that instead of Triton to invest in the oil sector, it decided to invest in the most important and profitable sector, which is agriculture. In this Triton integrated farm, they are doing aquaculture, poultry and crop production. It is important to know that in one year and four months of Triton’s investment, they have already created a market for themselves and have already employed about 400 people. You can see the level of expansion that is going on.”

He therefore assured the company that the Federal Government would give it all the support necessary for it to expand and succeed in agric business, saying the company’s integrated farm would help to boost agricultural productivity in fishery, poultry and crop production to ensure food security in the country.  He appealed to other companies to look at investing in agriculture, advising the banks to lend to agriculture instead of lending to oil sector, which eventually turned to bad debt.

Also speaking at the event, Chairman, Triton Group, Samtani Ashvin Kumar, said that integrated farm was designed to train youths in agriculture and presently has 400 workers. He said the company, which commenced operation last year in fish production is now producing 25,000 tonnes of fish, and is expected to produce 100,000 tonnes in five years.

He added: “Our farm is the only farm in the entire South-west region that is fully integrated in aquaculture, poultry and crop production. The company invested massively in cash crop production with 15,000 stances of cashew trees planted on 150 hectares; planted 300,000 tree crops on 300 hectares of land in accordance with international standard aimed at increasing conditions applicable to the natural environment, including Tick, Melanie and Tendril.”

Speaking further, the Minister He said: “The returns in agriculture are short terms. Most of you know that rice mature in 12 weeks, fish mature in 150 days, poultry mature in 32 days but if you invest in oil, it takes long time. So the best sector to invest is actually agriculture.

“The Triton farm, the aquaculture sector, they have large ponds, which can only produce as at now produce 6000 metric tons but in this country, we need over 3million metric tons, that is to tell you the opportunity that exist in the sector. That is why I am using this opportunity to call on other investors and also calling on the banks that have been running away from lending to agriculture.”
Original source: Nigeria today
TWITTER
FACEBOOK
WHATSAPP
PRINT
E-MAIL
TWITTER
FACEBOOK
WHATSAPP
E-MAIL