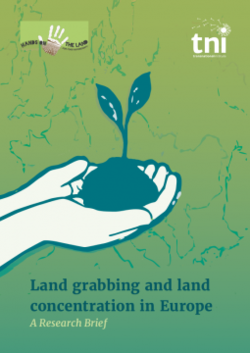 Land grabbing and land concentration in Europe
by Sylvia Kay
In discussions on the ‘global land grab’, the popular term to describe the rising commercial interest in farmland and the increase in large-scale land deals worldwide, Europe is often overlooked. Instead, Europe is held up as a showcase for good land governance, where well-regulated land markets and sound land investments are assumed to prevail. To the extent that the role of Europe in the global land grab is addressed, it is through the involvement of European investors and policy drivers in land deals in the global South.
This brief aims to fill this research gap by examining the scale, scope, drivers and impacts of land grabbing in Europe. Drawing together cutting-edge findings from the study Extent of Farmland Grabbing in the EU, commissioned by the European Parliament (EP) and presented to the EP Committee on Agriculture and Rural Development (COMAGRI) in June 2015, it shows that there is significant evidence that land grabbing is underway in Europe today.

Land grabbing is however just one element of the ‘land question’ in Europe and it is in this sense that the brief draws broader connections between the ongoing but still limited process of farmland grabbing in Europe and other burning European land issues, not least the extreme levels of land concentration observed throughout the EU. If left unchecked, there is a danger that land grabbing and land concentration, particularly when reinforced by other processes and policy biases (e.g. land speculation, land artificialisation, and the highly uneven distribution of CAP benefits), will block the entry into farming of young and aspiring farmers, while leading to the further exit of Europe’s small farmers.

This has real implications for European food security, employment, welfare, and biodiversity as with the demise and marginalisation of small-scale farming in Europe, the multiple benefits of this type of farming system and way of life also disappear. A new approach to land governance throughout the EU is called for. The brief ends with a set of policy recommendations for reforming European land governance. Using insights from the FAO Guidelines on the Responsible Governance of Tenure of Land, Fisheries and Forests, the brief argues that a fundamental shift in emphasis from a market-based to a human rights-based approach to the management of land and associated natural resources is required if the EU is to realize the smart, democratic, and sustainable land governance framework that European farmers and citizens deserve.
The report concludes with several policy recommendations to tackle land concentration in the EU and support Europe’s small farms. These will be shared and debated  with policymakers, including MEPs and representatives from the European Commission, during a day-long meeting on December 7th on Access to Land for Farmers in the EU.
Download:  Land grabbing and land concentration in europe.pdf(pdf, 716.89 KB)
Original source: TNI
TWITTER
FACEBOOK
WHATSAPP
PRINT
E-MAIL
TWITTER
FACEBOOK
WHATSAPP
E-MAIL