Tanzania: The dilemmas and difficulties of land policy reform 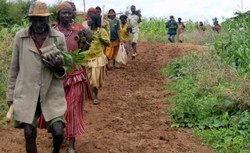 Is there such a thing as "responsible large-scale investment in land and agriculture"? asks Prof Marjorie Mbilinyi.
The Citizen | 20 September 2016

Tanzania: The dilemmas and difficulties of land policy reform
By Prof Marjorie Mbilinyi
The government is engaged in a consultative process to reform the land policy, and has invited civil society organisations to participate as well as the organised commercial sector. Contrary to the 1990s when the first liberalisation reforms took place, there has been more openness and joint consultations on the part of government. This has led to a catch-22 situation however for critics of "agribusinessisation", including myself.
Is there such a thing as "responsible large-scale investment in land and agriculture"?
The land policy reform is not taking place in a vacuum. Large-scale land acquisitions have escalated in Tanzania since the global crisis of 2008, with and without the informed consent of villagers and their village governments. Grassroots resistances to land grabs are forcing corporate and government leaders to the consultation table. They have succeeded to turn away at least some foreign investors who sense there is too much risk in the present situation.
The spectre of land grabs and the "new" plunder of African resources has been recognised and denounced by a wide assortment of actors, including a recent regional meeting of religious leaders in Dodoma, forcing the government to respond, as well as "development partners" and multinational agribusiness.


Global institutions that advocate agriculture commercialisation and the agro-industrial model, including the World Bank, UNCTAD, FAO and IFAD, have become sensitive to local resistances against land grabbing, as well as criticism of the model by scholars and activists in Tanzania and other African countries, as well as in the "north". This is visible in the language adopted by sophisticated agribusiness lobbies to assure the public that they support "small-scale" producers, promote food security, and mainstream gender into their operations. A good example is the Southern Agriculture Growth Corridor, SAGCOT, which involves the agro-industry giants of the world, as well as several multilateral and bilateral donors, the Tanzanian government and local companies.
These global institutions have also promoted the adoption of voluntary codes of conduct to support "responsible investments in large-scale agriculture", and organise stakeholder meetings and media events to win public approval. Responsible Investments in Property and Land is a similar initiative involving some of the most critical Tanzanian voices against land grabbing and agro-industry, organisationally and individually, including this author.
The dilemma


The contradictions in the present situation present a dilemma for advocacy organisations and activist individuals who genuinely oppose the agro-industrial model: to participate in consultations with government and large-scale investors in order to ensure that the rights to land and livelihoods of smallholder producers (cultivators, pastoralists, mixed farmers, fisher people, hunters and gatherers) are protected, and especially those of youth, women and vulnerable communities? Or refuse because of distrust of the process or fear of providing validation? In many respects, this reminds me of a different but similar choice which feminists must make with respect to "gender mainstreaming": agree to advocate for "inclusion" of girls/women in development, governance and policy processes on terms which empower them and lead to gender equity? Or reject gender mainstreaming as "domestication" of the women's rights movement?
As a participant in some of these processes, I have learned to recognise the following concepts and/or arguments that need to be rejected or reshaped:
-Responsible land or large-scale agriculture investments should "cause no harm" to local communities, small-scale producers, women - to be rejected; negotiations must ensure that the rights to land, water and other resources, and to livelihoods, of small-scale producers are protected with no compromise, while at the same time ensuring gender equity

-Responsible investments should lead to enhanced employment and incomes for communities, small-scale producers, women - inadequate; they must also lead to more sustainable livelihoods for small-scale family producers, and not effective dispossession and transformation from independent producers into casual farm labour or dependents on micro-finance handouts
-Small-scale producers must refer to both women and men producers within a given household and/or community, not only female household heads. The majority of rural women producers access land as "wives", but operate their own economic activities as independent producers in their own right. Hence both patriarchal and capitalist structures of ownership and exploitation are challenged simultaneously.
-In contrast to the prevalent outgrower or contract farming model, advocate for member-led producer cooperatives which enable small-scale producers to pool resources of land, labour, capital; to acquire farm inputs and equipment in bulk at reasonable prices; to enter higher levels of the value chain as processors and traders, thereby enhancing the value of their commodities and their negotiating power vis-a-vis buyers in and outside of Tanzania.