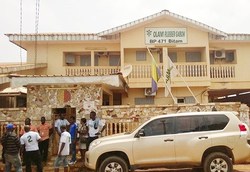 Gabon, Olam persuade people to farm as income from oil dwindles
by Pauline Bax
Gabon and Olam International Ltd. are trying to persuade young people to take up farming in a nation that faces dwindling crude revenue and imports almost all of its food.

As part of a government plan to develop cash crops, Singapore-based Olam offers to send aspiring Gabonese farmers on training courses in countries from Morocco to Malaysia.

“We need to foster the development of an agro-industry here,” Gagan Gupta, country head at the company’s Gabon unit, said in a phone interview. “It’s about creating human capital.”

At least 2,500 people will be able to observe cocoa farming in Ivory Coast, train as bulldozer operators in Morocco or learn modern farming techniques at a palm-oil plantation in Asia, Gupta said by phone from the capital, Libreville. Olam has partnered with Gabon to develop 100,000 hectares (247,000 acres) of oil-palm plantations in the nation, which has a population of less than 2 million.

Large-scale investments in the agricultural sector, especially in cash crops such as palm oil and rubber, may reverse Gabon’s slowdown in growth, according to the International Monetary Fund. Economic growth is expected to be around 3.2 percent this year, from 4 percent in 2015, because of declining crude production, the Washington-based lender said.

President Ali Bongo, 57, who will run for a second term in August, has said he wants to boost agricultural output to as much as 20 percent of gross domestic product by 2020, from about 5 percent at present. Under the government’s agriculture program, which began in 2014 and is known as Graine, people who complete a training course or are seen as eligible to farm can obtain land titles in less than a year. Graine is meant to “turn farmers into entrepreneurs,” Gupta said.

Oil accounts for 85 percent of Gabon’s exports and about 50 percent of revenue, according to the government. Output peaked at 370,000 barrels a day in 1997, after which it gradually declined to about 215,000 barrels daily last year. An oil producer since 1957, Gabon is the African country with the lowest population density.

The government has also fast-tracked the process of issuing land titles to cooperatives and individuals to boost agriculture, Gupta said. About 4,000 people have registered for the program in the hope of obtaining land, he said.

Olam is currently developing 50,000 hectares of arable land into an industrial oil-palm plantation in northern Gabon, according to Gupta. Once the plantation is completed, an additional 30,000 hectares will be laid out for small-scale palm-oil farmers.
Original source: Bloomberg
TWITTER
FACEBOOK
WHATSAPP
PRINT
E-MAIL
TWITTER
FACEBOOK
WHATSAPP
E-MAIL