Why Chinese agriculture engagement in Africa is not what it seems 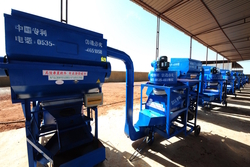 Machinery at a Chinese-owned peanut warehouse in central Senegal. (Photo: Seyllou/AFP)
The Western and African media have long fueled the myth that Chinese investors are buying up vast tracts of land across Africa as part of a neo-colonial plan to export food back to China. Sure, on one level, the theory appears plausible: China has around 20 percent of the world’s population with less than seven percent of the planet’s arable land, so it seems obvious that Beijing might look abroad in search of farmland to feed its people. There’s only one small problem. That premise, no matter how convincing it may sound, is just flat-out wrong.

Johns Hopkins University professor Deborah Brautigam detailed all of the reasons why this myth remains so durable in her 2015 book Will Africa Feed China? A lot of it, according to Brautigam, has to do with a mix of bad journalism, Western narratives of African victimization, and the Chinese themselves who oversell their ambitions in Africans.

Now, though, there’s a twist to the story. Not only are the Chinese not on a land-buying spree in Africa, it appears they are actually doing more to support African agricultural development than any other country in the world.

Professor Ian Scoones from the Institute of Development Studies at the University of Sussex recently completed a four-country research project on Chinese agricultural engagement in Africa and discovered that the combination of Chinese immigrant farmers in Africa along with the deployment of Chinese agricultural technology and People’s Republic of China government training programs that have brought some 10,000 African officials to China have all had a remarkably positive impact on Africa’s struggling agricultural sector.

Professor Scoones joins Eric and Cobus to discuss why Chinese engagement in African agriculture is not what it seems.