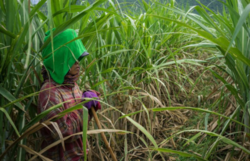 Australian banks and land grabs
​Almost two years ago Oxfam revealed that Australia’s Big 4 Banks — the ANZ, Commonwealth Bank, NAB and Westpac — are backing agriculture and timber companies linked to land grabs in developing countries.
These land grabs are forcing local people from their homes and farms without proper consent or compensation. This is leaving communities homeless and hungry.
All four banks claim to have responded to land grabs. But what have they actually done?
Our new report Still banking on land grabs shows that little has changed for affected communities. Public and investor pressure has led the banks to take land rights seriously — with Westpac and NAB making some progress. But so far no bank is doing enough and continue to back companies connected to land grabs.
Collectively Australians have $2.7 trillion in their household bank accounts and superannuation savings. That’s equivalent to a third of all developing country national debt combined. Where our money goes matters.
Read the report: Still banking on land grabs