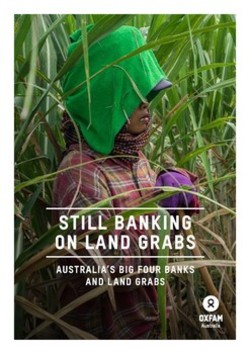 In April 2014, Oxfam released a report that revealed how Australia’s big four banks — the Australia and New Zealand Banking Group (ANZ), the Commonwealth Bank (CBA), the National Australia Bank (NAB) and Westpac — were backing companies connected to land grabs, forcing people off their land without adequate consent or compensation.

Scandalously, almost two years after the release of this report, Banking on Shaky Ground, little has changed.

It is clear that none of the banks are doing nearly enough. Each continues to avoid working directly with communities to provide meaningful redress, and each continues to place communities, and Australians’ money, at risk. This report reveals new links between the big four banks and three of the initial case studies in Banking on Shaky Ground. It also provides evidence that, even after Oxfam first alerted the banks to their exposure to land grabs, all four banks committed tens of millions of dollars in loan facilities to the agribusiness firm Cargill.

A former subsidiary of Cargill acquired large tracts of land in Colombia’s Altillanura region that had been set aside by law for family farming. In 2013, Oxfam noted that this concentration of land “exacerbates social inequality and conflict and worsens the country’s existing problem of concentrated land ownership”. Significantly, none of the banks included discussion of this additional exposure to allegations of land grabs in their 2014 and 2015 sustainability reports.

This raises another important question: how reliably are banks reporting land-related risks to
their shareholders and the wider public?