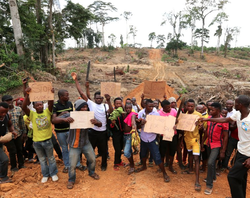 ﻿﻿Farmers in rural Nigeria protesting at Wilmar's destruction of their crops, trees and farmland. (Photo: FOEI / ERA.)
Ecologist | 27 May 2015

With the deadline due this year for the full implementation of Wilmar's 'No peat, no deforestation, no exploitation' promise, the oil palm giant is keen to push its green image in Europe. But for communities suffering its land grabs in Nigeria, nothing has changed. While Wilmar spins green rhetoric, its bulldozers are still destroying vast swathes of forest and farmland.

In December 2013 Wilmar adopted a "no deforestation, no peat and no exploitation policy" to address its well-documented environmental and human rights failings.

It was hailed as a brave step which would take Wilmar from being named by Newsweek as the world's least environmentally friendly big company in 2012 to a champion of sustainable operations.

Wilmar gave itself, its subsidiaries, and its third party suppliers two years to reach its goal: a serious-sounding commitment to dealing with the land-grabbing cases, human rights abuses, forest destruction and climate impacts that have dogged its operations.

Good news? Not quite. Friends of the Earth Europe has been campaigning for years to address the problems that Wilmar has caused in South East Asia and Africa. Our groups in Indonesia, Nigeria, Liberia and Uganda continue to see misconduct by Wilmar and its subsidiaries in these countries.

In February this year legal action was taken by affected farmers in Uganda to claim restitution for their grabbed land and fair compensation for damages, three years after their land was taken for the plantation development.

In 2011 and 2012, Wilmar International purchased several plantation sites in Cross River State in southeastern Nigeria. These land purchases were part of the state's efforts to court 'high capacity' foreign investors to revive its flagging plantation economy.

Together these plantations form a joint venture between Wilmar and the British food commodity firm PZ Cussons - PZ Wilmar.

According to a November 2014 article in Businessday PZ Wilmar's investment of $165 million to develop the current 26,000 hectares of palm oil plantations is only the beginning. Tunde Oyelola, vice chairman of PZ Wilmar, announced plans to

" ... aggressively expand the nation's palm oil production to 240,000 hectares of plantations, employing over 250,000 within five to six years."

The plantation in Nigeria began development before Wilmar's sustainability pledge in 2013, but its expansion has continued apace since. A Friends of the Earth delegation organised by Environmental Rights Action / Friends of the Earth Nigeria visited affected communities in May 2015.

Our visit was sobering. Far from operating like a corporation intent on meeting sustainability goals, Wilmar is up to its old tricks. In the village of Ibogo, the local community saw their farmland being excavated just one week before we arrived. They took us to show the land and the destroyed crops.

Their stories are heartbreaking, because these people are desperate. Some of them have been cultivating the land for decades, and now their crops - plantains, bananas, cocoa and vegetables - are destroyed they have no way to provide alternative livelihoods.

William Ogobe, 29, and with a young family, told us that the project had taken his farmland:

"We used to plant plantains, cassava, cocoyam and vegetables here, as well as trees for timber. We grew wood for businesses, for houses and to feed ourselves - for firewood. Now because the forest is gone we have nothing left. When the project finishes, we will have no future left. Wilmar wants to render us useless in life. But we will not accept this."

The citizens of Ibogo are right to be worried about their future. At other plantations that had already been developed, the consequences have been disastrous.

In the nearby village of Betem, the water supply was severely damaged and polluted by PZ Wilmar's operations. The alternative borehole that PZ Wilmar supplied is not functioning and the company has not dropped by to repair it. Even for the brief spell where it worked, the water quality was poor, a thick brown liquid that was a major source of illness in the community.

PZ Wilmar has provided jobs to some in the community, but these are volatile, contract-free positions as day labourers - a far cry from the work of operating small-scale farms of their own. With no occupational training offered, it is difficult to see a way out for many.

Cases like these - of environmental destruction, and human rights violations - formed the basis of a federal lawsuit from the Nigeria-based NGO Rainforest Resource & Development Centre in 2013. After a lengthy delay, the case will hopefully be heard in June 2015.

There are also calls to to charge PZ Wilmar with contempt of court, because it continues to operate, whereas legally they should have stopped their operations during the trial. But while the legal process rumbles on, communities in Nigeria are organising.

ERA / Friends of the Earth Nigeria recently set up a volunteer-run community forest watch programme, which unites 13 communities affected by Wilmar's plantations, provides training to these communities and develops joint strategies to protect the forest and people's livelihoods.

These responses to Wilmar's land grabbing at the local level are a powerful reminder of the potency of community action.

Nigeria is not an isolated case for Wilmar - and they are not solely accountable. The chain of responsibility stretches back to those that finance their operations. Friends of the Earth groups in Europe and the US have regularly brought the case to the attention of Wilmar International and its European and US financiers.

We have also reported on how Wilmar's land grabbing in Uganda has been financed by the United Nations agency IFAD, the International Fund for Agricultural Development. In 2010 IFAD backed an oil palm project partly owned and operated by Wilmar on Bugula Island, Lake Victoria, with a $52 million loan. But it refused to comment when asked about the 3,600 hectares of pristine forest it had destroyed, and the hundreds of farmers left destitute after their land was grabbed.

The continued inaction further proves that we cannot rely on self-regulation by either companies or financiers for genuine action. Wilmar has not changed its ways of working - it is high time to bring the company to account for its human rights violations, ameliorate its environmental impacts and pay compensation to the hundreds of victims facing eviction and dispossession.

It is also essential that governments, financiers and UN agencies do not wait for Wilmar and others like it to improve their practices. Binding human rights and environmental rules for companies and their financiers must be established at the national and international levels.

Friends of the Earth Europe, together with many other groups, is campaigning to ensure the UN adopts a proposal which would increase access to justice for local communities and affected people in Nigeria and around the world.

Action: Sign the Treaty Alliance Statement of committed networks and campaign groups around the world who are developing a binding international instrument to address corporate human rights abuses.

Anne van Schaik is accountable finance campaigner at Friends of the Earth Europe.

Godwin Ojo is the director of Environmental Rights Action/Friends of the Earth Nigeria. [email protected]