Authorities plan to arrest about 85 farmers who have illegally occupied a large tract of land, formerly

Palm oil plantation squatters at the protest on Sunday, they claim that officers used excessive force when removed the group where they had settled. Photo: Kritsada Mueanhawong/Phuket Gazette

The mostly landless farmers want access to the land on which to grow oil palm. An oil palm growing concession was previously granted to Univanich Palm Oil Plc covering about 10,000 rai of the land.

The concession has now expired and the deteriorated forest land in tambon Plai Phraya is currently under the supervision of the Royal Forest Department (RFD).

The farmers have encroached on about 2,000 rai of the land for months and attempts by the authorities to convince them to leave have proved futile.

Pol Col Chinrat Ritthakananont, deputy chief of the Krabi provincial police, said the two most recent rounds of talks with farmers were held on Sept 8 and 11. A team of police, soldiers, forestry officials and security volunteers would be deployed this morning to evict the farmers, after a court approved warrants for the arrest of 85 farmers on encroachment charges.

The authorities including the military met in the province yesterday to plan the eviction operation. They admitted encroachment on oil plantation land was a problem in the area, but said they had a duty to act. 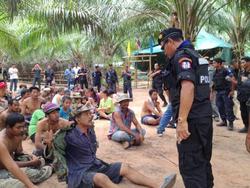 One protester was allegedly shot in the chest and 50 others slightly wounded. Photo: Kritsada Mueanhawong/Phuket Gazette

A similar problem could also spread to other parts of Krabi where more than 70,000 rai of land has been developed previously as oil palm plantations.

Col Charoon Chaturong, commander of the Khlong Tom army unit with jurisdiction over the tambon Plai Phraya plantation, said police will be the core agency mobilising the eviction team. The military will provide reinforcements if needed.

Farmers had been told the authorities' plan to contain the area. Police have put up two billboards advising farmers to take down their living quarters by early today.