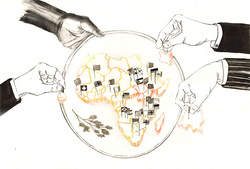 Grading Donors on Land Rights: Where We Are, and Where We’re Going

In 2010, I was sitting in a meeting at the World Bank where initial principles were being discussed for guiding large-scale agricultural investments– which had grown dramatically after the food price spike of 2008.

Governments, the private sector, civil society and others want to promote investment in ways that benefit all local communities, investors and governments; and improve economic growth and food security for many of the worlds most vulnerable populations.

However, four years later, the global community is still deeply engaged in developing these guidelines for the private sector, now known as the Principles for Responsible Agricultural Investment (RAI) and led by the UN Committee on World Food Security (CFS).

While we do not yet have investment principles for the private sector, we do have guidelines for host governments to use in developing land policies, laws and procedures to promote good land governance, including in the context of investment. They are called The Voluntary Guidelines for the Responsible Governance of Tenure of Land, Fisheries, and Forests in the Context of National Food Security. Secure property rights are the gateway to broad-based economic growth, improved food security, reduced violent conflict, and improved natural resource management and, by extension, one of the best tools to address global climate change. Weak land and resource rights limit investment (of any size),threaten good natural resource management, often promote conflict and pose special problems for vulnerable groups including minorities, indigenous people, the poor, and women.

This past week, nearly 1000 experts and influencers in the land rights sector gathered at the World Bank Conference on Land and Poverty to present field-based research, announce new initiatives and to develop innovative partnerships. Many of these presentations and announcements are rooted in the desire to implement aspects of the Voluntary Guidelines.

I had the pleasure of chairing the Voluntary Guidelines negotiations back in 2011 and 2012 for the eventual adoption of this seminal agreement. Having had a unique position to participate in the negotiations, and now managing USAID’s global program supporting the Voluntary Guidelines, I feel compelled to take stock of where we are now and what have we accomplished in the past two years and, most importantly, to ask where we should go next.

So Where Are We Now?

I believe we are witnessing the emergence of a global consensus among bilateral and multilateral institutions, the private sector, and civil society organizations that the Voluntary Guidelines are the guiding doctrine for emerging-economy governments to be able to recognize and promote the protection of property rights around the world.

In the two years since the Voluntary Guidelines were adopted, donors and development agencies have started to align their bilateral and multilateral assistance programs supporting property rights and improved resource governance to them.

Throughout 2012 and 2013 USAID led an initiative through the Global Donor Working Group on Land that collected information on the land and resource governance programs of 16 donors and development agencies to help us better coordinate our programs, and understand their successes and pitfalls as they pertain to supporting the Voluntary Guidelines. The result is a comprehensive database of 445 programs, being implemented in 119 countries, with a value of over $2 billion.

And Where Are We Going?

While the development community has made important progress supporting the Voluntary Guidelines, I believe we have far more to do.  Here are some suggestions:

These ideas and recommendations were echoed in more than two dozen meetings USAID hosted with private sector, civil society, development partners and academia at this year’s World Bank Conference on Land and Poverty.

If we want a stable world, where market-based democracies thrive and trade and job markets expand, we must focus on empowering every global citizen to make private decisions about how they will acquire, use, enjoy, and dispose of property.