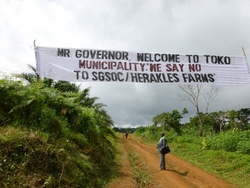 SEFE calls President of Cameroon's land deal with US company Herakles Farms a grave injustice and hindrance to conventional values.

On 25 NOVEMBER 2013, the President of Cameroon issued three decrees granting 19,843 ha of land to Herakles Farms in southwest Cameroon.

The Presidential decrees of November 25, 2013, attributing a large parcel of native land to SG Sustainable Oils Cameroon/Herakles Farms in parts of the South West region of Cameroon are reminiscent of colonialism and slavery.

The 1976 land tenure act, which is quoted in the decrees, lays out a process for the issuance of presidential decrees granting land leases to private companies.  In the case of Herakles Farms, provisions of the 1976 act and international laws were violated. These violations were exposed by many credible organizations and local people who brought the violations to the attention of the government. Unfortunately, the President decided to grant Herakles a land lease against the wishes of the local people

The land lease will attract marginally more revenues to government coffers by raising the amount of rent per hectare to $6 from the previous fee of $1 per hectare.  The land lease reduced the concession area from 73,000ha to 19,843ha.

SEFE is not against the Cameroon government's development policies (Vision of Emergence 2035). What alarms us is how the location for projects is being decided upon and how existing national and international laws are not being respected. So our campaign against the Herakles project is a campaign against the injustice inflicted on the affected area, on our country and on the world.

In 2011, the President, in defining his Vision of Emergence 2035, changed the name of the Ministry of Environment and Nature Protection to the Ministry of Environment, Nature Protection and Sustainable Development. Sustainable development can only be attained when all parties mutually agree to undertake a venture with the strict respect of principles and relevant criteria guided by existing conventional laws. The President’s decree granting a land concession to Herakles in a very sensitive area, ignoring local opposition to the project and warnings from eminent scientists and environmentalists that the project will cause widespread irreversible impacts, is a misstep and misjudgment on the part of the Cameroonian Government.

Since 2010, SEFE has led a non violent campaign against Herakles Farms by organising community resistance against the establishment of large-scale oil palm plantations in the midst of four very important protected areas including the iconic Korup National Park. The area is also a complex watershed formation (Rumpi Hills Forest Reserve), which provides freshwater to nearby and far-off communities in Cameroon and Nigeria, and it is widely considered to be a hotspot for biodiversity and a habitat for rare, endemic and threatened species of animals. Therefore the project will not only have negative impacts to nearby communities but also on far-off communities living on coastal fringes in both Cameroon and Nigeria (Cross River State). So it cannot be said to be a sustainable project.

By granting this concession, the President seems to have denied inhabitants their inalienable rights to free, prior and informed consent and also ignored the widespread impacts of this large-scale oil palm plantation. Tension is now rife within the concession area since the signing of the decree on November 25, 2013, and could degenerate into conflicts among the villages in the area which have long co-existed in peace and enjoyed communal life together for many centuries.

The company has on several occasions said that the area is a secondary and degraded forest but most of the land within the Herakles lease is pristine forest, whether in Fabe, Masaka, Sikam, Talangaye, or other communities. The decree just reveals the myths surrounding investment in Cameroon by condoning Herakles' violations of laws, thereby exposing the investors in Herakles to operational, financial and reputational risks.

A series of irregularities contained in the decree provide further credence to the fact that the document was compiled under dubious circumstances. For instance, the amount of land signed by the chiefs and notables during the land consultative board meetings is different from that contained in the presidential decree, like in Sikam(decree 3410 ha and technical document 3110 ha), Manyemen-Ebanga (decree 2941 ha and technical document 2720 ha) and Ayong (decree 605 ha and technical document 300 ha). Also, lands belonging to some villages in the Mundemba-Toko concession area known for their unequivocal opposition to the project were given to other villages without the knowledge and consent of the concerned villages. To cite just two examples land belonging to Beleme was designated as Beboka, while land belonging to Boso was designated as Kuma. Village boundaries are also inaccurately delineated. For instance, Lipenja 1 is shown to border with Esoki Bima when Lipenja 1 Batanga has no common boundary with Esoki Bima. The decree should be cancelled because of inadequate facts contained in the so called technical documents as it is void of actual information and inputs from communities.

This implies that neither the government officials that produced the technical documents nor Herakles actually carried out field studies in the area and/or if they did then they should be punished for having produced such deceitful and misleading documents that caused the president to sign such an erroneous decree.

SEFE believes that it is not in the interest of the government of President Paul Biya, which should be fully committed to the Kyoto protocol on climate change not to increase emissions through the conversion of tropical forests into a monoculture system. Cameroon’s obligations to global instruments like Millennium Development Goals, Convention on Biological Diversity, RAMSAR, UN human rights bills, and others which demand the strong adherence to peace and stability,  including the preservation of the environment and the protection of citizenry, which are also breached by the granting of a land concession for the establishment of a large-scale palm oil plantation that is socially, economically and environmentally unsustainable in this very sensitive area.

SEFE's campaign is not merely about stopping a Presidential decree granting a land concession to Herakles but something bigger than that. It is about giving the justice denied to communities that will be impacted negatively by the Herakles’ project as well as those living on coastal fringes in both Cameroon and Nigeria that will receive no benefits from the project but will be seriously impacted from pollution, flooding, changes in hydrology, biodiversity loss, and impacts to other underlying systems like mangroves south of the project. SEFE will continue with the campaign until justice is achieved because no decree has ever and will ever extirpate justice.