Victimising the victims of land grabbing in Malen Chiefdom 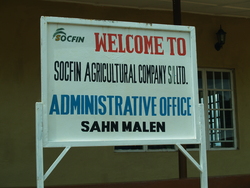 Victimising the victims of land grabbing in Malen Chiefdom

Since the advent of large scale investment in oil palm plantation by SOCFIN Agricultural Company (SAC) in Malen Chiefdom, citizens of the chiefdom, land owners and users who are opposed to the manner in which their land was ascribed by the government through the chiefs have not seen any respite.

On Monday 7th October 2013, five members of an organised interest group – Malen Affected Land Owners Association (MALOA) have been arrested by the police, stationed in Sahn. They have been allegedly accused of destroying a number of oil palm seedlings belonging to SOCFIN. According to investigations onsite, a bike rider testified seeing a group of people in the SAC plantation at midnight Saturday, 5th October but was unable to identify any of them.

MALOA members have claimed that they are being threatened, vilified and victimized by those who are directly benefiting from the presence and operations of the company.

Green Scenery is concerned regarding the hasty investigation by the police in Pujehun. Lack of applying precautionary principles to allow for thorough and in depth investigation into the matter before referral to the Bo police is clearly pointing to intrigue. “I spoke from Freetown to Sima Mattia in Bo on Saturday 5th and Monday 7th about a field monitoring activity. How he may have been in Malen to participate in the brushing of the SOCFIN palm seedlings still remains to be verified,” says Joseph Rahall, Executive Director of Green Scenery. The Secretary General, Sima Mattia, said from his cell that MALOA is targeted because they are advocating for a better condition from the Malen land deals and offering advice to those who do not wish to dispose of their land for large scale agriculture. “We are seen as threat to those who want to grab our land and so victimized.”

Green Scenery is concerned that in a democratic country like Sierra Leone, the human rights of every citizens counts and should be treated as such. We say this because we observe a trend particularly in Malen Chiefdom which does not bode well with the country’s human rights credentials. It can be recalled that in 2011, forty people were arrested by the police in Malen for peacefully protesting against taking over of their land. They were accused of riotous conduct and taken to Bo away from Pujehun court jurisdiction. Fifteen of them were later charged to court in Pujehun after spending days in the police cells in Bo. Up until now that matter is still lingering in the magistrate court in Pujehun.

In 2012, another group of four persons were arrested allegedly for fighting company workers who went to take a community land in Bassaleh. The four were speedily condemned to prison or pay a fine of Le 800,000 (US 200) each. They were imprisoned for months until their fines were paid.
Communities have been subjected to threats by highly placed police officials about meetings and associations. Twice MALOA as an organisation have been refused clearance to undertake a peaceful procession to register their complaints to the District Officer. These are contrary to the caution of the Minister of Justice and Attorney General on his visit to Sahn Malen when he said that citizens have a right to meet, associate and seek their interest and no one should restrain those freedoms as long as they behave peacefully.