Cargill misses the point on land acquisitions in Colombia 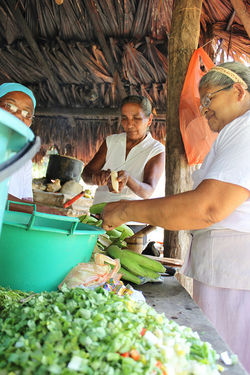 Women cook for a commemoration of massacres of displaced people in Colombia. Photo used by permission: Paula Rodríguez via Flickr http://bit.ly/ZjplWm

Cargill misses the point on land acquisitions in Colombia

Oxfam says access to land is not only vital to small farmers’ livelihoods, but to the peace process and rule of law.

Stephanie Burgos is a senior policy advisor at Oxfam America.

The hotel clerk smiled at me as I was checking out of my hotel room in Bogota, Colombia last Saturday. It was before dawn and I was barely awake. As she printed my hotel bill addressed to Oxfam, she said she saw that Oxfam had released a report the previous day about irregular land acquisitions fueling further concentration of land ownership in Colombia’s Altillanura region.  Titled Divide and Purchase: How land ownership is being concentrated in Colombia, the report reveals how Cargill acquired land destined for small farmers with limited resources.

I asked her what she thought about it. She said Oxfam’s work on this issue was welcome and shook her head, adding that it was very frustrating to see that such actions continue to be possible in her country. Last month’s agrarian strike, which mobilized farmers and grassroots groups on the streets of Bogota, was a stark reminder of the importance of land issues to small farmers in Colombia.

Oxfam’s report focuses on the case of Cargill, the world’s largest commodity trader, whose acquisition of 52,576 hectares in the Department of Vichada exceeded by 30 times the amount of such land that Colombian law stipulates can be accumulated by one entity in that part of the country. Cargill evaded the limit by dividing its purchase, using 36 shell companies apparently set up just to purchase an amount of land within the legal limit. This land—referred to as baldíos—had been awarded by the state to landless farmers as part of agrarian reform processes.

The event in Bogota last Friday, where I presented the results of the study, was co-hosted by Oxfam with Planeta Paz, The Consultancy for Human Rights and Displacement (CODHES), and The Center for Research and Popular Education (CINEP). It succeeded in generating a broad debate in Colombia about the problem of land concentration and the laws and regulations on land ownership of baldíos, as well as potential reforms that could either facilitate or prevent further concentration. The issue was among the top three most popular tweets in Colombia that day.

The only one missing from the debate was Cargill. Oxfam invited Cargill to join us in a public discussion, but the company declined to be directly represented and instead requested that the Colombian Society of Farmers (SAC) be Cargill’s voice on the panel. Representatives from the state’s Institute for Rural Development (INCODER) and the comptroller general for the agriculture sector (Contraloría General de la República) joined the panel, as well as Senator Jorge Robledo, the director of the NGO Planeta Paz, and a national small-farmer leader, Julio Armando Fuentes of the Roundtable for National Agrarian Dialogue. The discussion was robust:

“This practice of land concentration by accumulation of baldíos is taking away the constitutional right of small-scale farmers to that land,” stated Senator Robledo.

“We are facing a new colonization from a macro-economic perspective, the colonization of agricultural land that is no longer in the hands of those who should have it … a result of legal maneuvers and rigged interpretation,” said Luis Alberto Higuera, Comptroller for the Agriculture Sector.

“Civil society organizations call on the national government to include us in the dialogue on the agrarian policy that the country needs,” said Julio Armando Fuentes, from the Roundtable for National Agrarian Dialogue.

As my colleague Chris Jochnick previously noted, while Cargill chose not to engage in a public discussion in Colombia, the company did post a response to Oxfam’s report on its website and with some twitter activity. Cargill also touted its investment in large-scale corn and soy production in Vichada.

Yet Cargill still fails to address the crux of the problem in Colombia, which is the further concentration of land ownership, as the company’s specific land acquisition means it has taken control over resources away from small farmers. Land is a fundamental asset for production. The company seems to ignore the fact that highly concentrated land ownership in Colombia is widely recognized as both a cause of and fuel for the internal armed conflict that has lasted over half a century. It is no coincidence that the first item on the agenda of peace talks between the Colombian government and the FARC is the democratization of access to land.

Cargill’s argument that its land purchases did not affect small farmers directly because the average size of the parcels purchased was 1,500 hectares ignores the reality and the law in Colombia. The ‘Family Agriculture Unit’ (UAF), established by law as the amount of land considered necessary for a family to obtain a decent livelihood in Colombia, is the maximum limit of land (baldíos) the state may award to a single person. The UAF is not the same for the whole country, but varies according to municipalities, depending on production potential and other factors. The UAF in Vichada Department, where Cargill purchased land, is up to 1,725 hectares in some municipalities.

Colombia’s Constitutional Court has ruled on several occasions that baldíos are public assets that must be used to benefit society. This is in response to article 64 of the Constitution of 1991 that directs the state to promote progressive access to the ownership of land for agricultural workers with limited resources, in order to improve the income and quality of life of the rural population. Agrarian reform act 160 of 1994 prohibits any individual or legal entity from accumulating more than one UAF of land previously adjudicated as baldíos.

Cargill’s assertion that creating shell companies to fragment the purchase of a large tract of land is a standard way of doing business in the real estate industry around the world, which Oxfam cannot verify, is no excuse for ignoring Colombia’s laws and regulations restricting accumulation of baldíos.

Now, the government of President Santos seems to be pressing for reforms to the law that would enable further concentration of land in Colombia, even though this would be incoherent with the government’s own commitments to date in the peace talks. Oxfam hopes to contribute to the debate about the consequences of such ill-advised reforms.

There is a growing consensus that investing in small farmers is key to ending hunger. Oxfam asserts that small farmers must retain access to land ownership, in order that a mix of large and small-scale farming can work to reduce poverty and food insecurity. Colombia’s history has shown that concentration of land ownership is not the path to peace much less to equitable development and poverty eradication.

I had hoped that Cargill would understand this. Apparently, they have not.