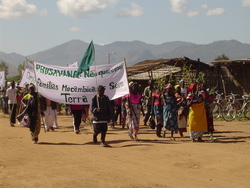 Opposition to the ProSavana project in Northen Mozambique is intensifying.


Subject: Open Letter to Urgently Stop and Reflect on the ProSavana Programme

The Government of the Republic of Mozambique, in partnership with the Governments of the Federative Republic of Brazil and Japan, officially launched the ProSavana Programme in April 2011. The programme is the result of a trilateral partnership of the three governments with the purpose of, purportedly, promoting the development of agriculture in the tropical savannas of the Nacala Corridor in northern Mozambique.

The entry and implementation strategy of ProSavana is based on, justifiably, the urgent need to fight poverty and the national and human imperative of promoting the economic, social and cultural development of our country. Or at least, these have been the main arguments used by the Government of Mozambique to justify its option to pursue a policy of attracting Foreign Direct Investment (FDI) and the subsequent deployment of large investments in mining, hydrocarbons, monoculture tree plantations and agribusiness for the production of commodities.

We, the rural populations, families from the communities of the Nacala Corridor, religious organisations and Mozambican civil society, recognising the importance and urgency of combating poverty and promoting sustainable and sovereign development, believe it is timely and crucial to voice our concerns and proposals in relation to the ProSavana Programme.

The ProSavana Programme is already being implemented through its 'Quick Impact Projects' component, without the Environmental Impact Assessment Study ever having been carried out, publicly discussed and approved, one of the main and essential requirements of Mozambican legislation for the implementation of projects of this size, normally classified as Category A.

The breadth and grandeur of the ProSavana Programme contrast with the failure of the law and the total absence of a deep, broad, transparent and democratic public debate, preventing us, (small-scale farmers, families and the population), in this way, from exercising our constitutional right of access to information, consultation, participation and informed consent on a matter of great social, economic and environmental relevance with direct impact on our lives.

However, since September 2012, we have been conducting an extensive debate and wide-reaching meetings with various sectors of Mozambican society. According to the latest documents we had access to, the ProSavana Programme is a mega partnership between the Governments of Mozambique, Brazil and Japan, which will cover an estimated area of ​​14.5 million hectares of land in 19 districts of the provinces of Niassa, Nampula and Zambézia, allegedly intended for the development of large-scale agriculture in tropical savannas, located along the Nacala Development Corridor.

After several discussions at community level in the districts covered by this programme, with Mozambican Government authorities, diplomatic missions of Brazil and Japan and their international cooperation agencies (Brazilian Cooperation Agency-ABC, and the International Cooperation Agency of Japan-JICA), we find that there are many discrepancies and contradictions in the sparse information and documents available, which are indications and evidence to confirm the existence of defects in the programme design; irregularities in the alleged process of public consultation and participation; serious and imminent threat of usurpation of rural populations' lands and forced removal of communities from areas that they currently occupy.

President of Mozambique, President of Brazil and Prime Minister of Japan, international cooperation must be anchored on the basis of the interests and aspirations of people to build a world of greater justice and solidarity. However, the ProSavana Programme does not abide by these principles and those driving it do not propose, much less show themselves to be available to discuss in an open manner, the substantive issues associated with the development of agriculture in our country.

President Armando Guebuza, we would like to recall that Your Excellency, along with millions of Mozambicans, men and women, sacrificed much of your youth, fighting to liberate the people and the land from colonial oppression. Since those hard times, rural populations, with their feet firmly on the ground, took it upon themselves to produce food for the Mozambican nation, raising the country from the rubble of war to building an independent and just society characterised by solidarity, where everyone could feel that they are the children of this liberated land.

President Guebuza, more than 80% of the Mozambican population depends on family farming for its livelihood, accounting for the production of more than 90% of the country's food. ProSavana is a tool for creating optimal conditions for multinational corporations to enter the country, which will inevitably rob rural families of their autonomy and disrupt the small-scale food production systems, which could cause the emergence of landless families and increased food insecurity, i.e., the loss of the greatest achievements of our National Independence.

President Dilma Rousseff, solidarity between the peoples of Mozambique and Brazil comes from the difficult times of the national liberation struggle, through national reconstruction during and after the 16 years of war that Mozambique went through. More than anyone, President Dilma you suffered oppression and were a victim of the military dictatorship in Brazil and knows the price of freedom. Currently, two-thirds of the food consumed in Brazil is produced by rural populations and not by the corporations that the Brazilian Government is exporting to Mozambique through ProSavana.

President Dilma Rousseff, how is it justified that the Brazilian Government does not give priority to the Food Acquisition Programme in Mozambique, which we rural populations support and encourage? Paradoxically, all financial, material and human resources at various levels are allocated to agribusiness development promoted by ProSavana. How is it that international cooperation between Brazil, Mozambique and Japan, which should promote solidarity among peoples, is converted into an instrument to facilitate obscure commercial transactions and promote the grabbing of community land, which we use in the age-old manner to produce food for the Mozambican nation and beyond?

Prime Minister Shinzo Abe, Japan, through JICA, for decades contributed to the development of agriculture and other sectors in our country. We repudiate the current policy of the Japanese Government's cooperation with Mozambique in the agrarian sector. More than the investment in mega infrastructure in the Nacala Corridor to allow the outflow of agricultural commodities through the port of Nacala, as well as financial and human support to ProSavana, it is our understanding that the Japanese venture should focus on small-scale agriculture, the only one capable of producing adequate food in the quantities needed for the Mozambican population, as well as promoting sustainable and inclusive development.

Esteemed representatives of the people of Mozambique, Brazil and Japan, we live a phase in history marked by growing demand by and expansion of large financial groups and multinational corporations through appropriation and control of natural resources globally, transforming these into commodities and claiming these as a business opportunities.

Excellencies, on the strength of the facts presented, we rural populations of Mozambique, families from the rural communities of the Nacala Corridor, religious organisations and civil society, denounce and repudiate as a matter of urgency:

Despite the accusations presented above, we rural populations of Mozambique, families from the rural communities of the Nacala Corridor, religious organisations and civil society, request and demand urgent intervention of Your Excellencies, President of Mozambique, President of Brazil and Prime Minister of Japan, as the legitimate representatives of your people, in order to urgently halt the intervention logic of the ProSavana Programme, which will have irreversible negative impacts for rural households such as:

Thus, we small-scale farmers, families from the communities of the Nacala Corridor, religious organisations and national civil society signatories to this Open Letter, publicly express our indignation and outrage at the way the ProSavana Programme has been designed and is being implemented on our lands and the communities of our country.

We advocate for the development of agriculture based on production systems, rather than products, i.e., the non-destruction of the family method of production, which over and above economic issues also incorporates specifically the way of occupation of geographic spaces, the social and anthropological dimension that has proved very sustainable throughout the history of mankind.

The social movements and organisations signatories to this Open Letter turn to Your Excellencies, President Armando Guebuza, President Dilma Rousseff and Prime Minister Shinzo Abe, in your capacity as Heads of Government and State and legitimate representatives of the peoples of Mozambique, Brazil and Japan to see to it:
Finally and according to the statement above, we Mozambican small-scale farmers, families from the rural communities of the Nacala Corridor, religious organisations and civil society, demand cooperation among countries based on the genuine interests and aspirations of the people, a cooperation that serves the promotion of a more just and caring society. We dream of a better and viable Mozambique, where all Mozambicans men and women can feel that they are the children of this land, united and engaged in the construction of a state whose sovereignty comes from and resides in the people.