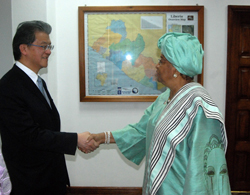 Publication of a full audit of how Liberia awarded its resource concessions between 2009 and 2011 is a global first, said campaigning watchdog Global Witness today. The audit, which was published last week, reveals significant violations of Liberia's laws that the government now urgently needs to address. The publication of the audit also helps set a new standard for implementation within the Extractive Industries Transparency Initiative (EITI), an international reporting scheme that aims to cut corruption in oil and gas, mining and other natural resource sectors.

The audit, along with a second report documenting tax and other payments from resource companies to government, was carried out by independent auditors and published by the Liberian chapter of the EITI. Released just days before the EITI’s global conference in Sydney, Australia this week, the audit shows that the government failed to fully apply its own laws when awarding 60 of 68 contracts for mining, oil and gas, logging and large-scale agriculture.

“Despite many difficulties in managing its natural resources, Liberia has taken positive first steps towards improving the situation by publishing this information,” said Natalie Ashworth, Senior Campaigner at Global Witness. “Liberia is leading international efforts by recognising that genuine transparency doesn’t just mean payments – the public also needs to know how deals are done and what the terms of deals are. EITI now needs to ensure that it follows Liberia’s lead globally and insist that all countries publish resource contracts and information on how they were awarded.”

Key findings of the two reports include:

New international rules for the EITI, which will be adopted at the Initiative’s Global Conference, currently only encourage countries to publish contracts, trailing behind laws and practices in countries such as Liberia where publication of contracts is required. The new rules will also include requirements for companies to disclose the true identity of ultimate company owners by 2016, a move which will be key to stopping corrupt officials from getting control over lucrative shares in extractive projects. Civil society organisations are calling on countries such as Liberia to start implementing this rule as soon as possible.

The question of owners’ identities has particular relevance for Liberia, where a quarter of the country was signed away under illicit ‘private use permit’ logging deals between 2010 and 2012. The majority of these contracts were awarded to companies backed by notorious international logging giant Samling, which has links to high-ranking Malaysian officials. While the Liberian government promised action on these deals back in January, the deals are still to be cancelled and those responsible prosecuted.

“Liberia has a history of launching corruption investigations and then not acting on the findings. The government must now apply the EITI audit’s recommendations and follow its own laws,” said Ashworth. “It’s not all the government’s fault - companies operating in Liberia should be ashamed of taking advantage of a weak government and not insisting that their deals abide by the law.”

1)      Responding to the audit’s finding that its concession was allocated in breach of Liberian law on competitive bidding, Golden Veroleum Liberia stated that it understood that this concession was granted under applicable sole-source provisions of the Public Procurement and Concessions Commission Act then in force.

2)      Official responses from relevant Liberian government agencies are included in the audit report, in some cases challenging the findings. In virtually all cases, including the lack of competitive bidding for contracts with Golden Veroleum and Sime Darby, the auditors assess the government response and firmly stand by their conclusions.