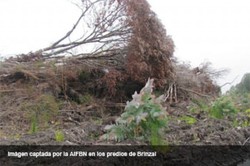 Harvard’s aggressive approaches to timber and agribusiness in Latin America are unique among universities
The Crimson | 29.04.2013

Agrícola Brinzal is a Chilean logging company currently facing lawsuits for felling 189 acres of native forest and then reforesting with foreign tree species. The corporation’s practices, which include growing water-intensive eucalyptus trees, have been accused of harming both the environment and nearby communities. According to a recent university tax filing from 2011, Harvard owns 99.99 percent of Agrícola Brinzal, which generated more than half a million dollars in income for our endowment. As students who benefit from the profits of this company’s business model, we are disturbed that Harvard has stood by as Agrícola Brinzal has been accused of degrading the environment and neglecting local laws.

Like many universities, Harvard funds much of its staff and faculty salaries, student financial aid, operating costs, and research budget with its endowment earnings. Unlike many universities, however, Harvard’s endowment directly owns more than 100 companies, many of them natural resource and timber companies in the developing world. And unlike most universities, Harvard directly owns at least one company that has been implicated in illegal land exploitation practices.

Last month, two investigative reporters in Chile released a report detailing the exploitative logging practices of Chilean companies owned by Harvard. The report, published by the Center of Investigative Journalism of Chile (and later translated into English), quotes a government official explaining that the scale of Agrícola Brinzal’s logging is unprecedented on the island of Chiloé. Harvard’s company has either bought up recently clear-cut land or engaged in the felling of native trees itself, and reforested that land with eucalyptus trees. Recognizing the destructive environmental effects of this deforestation, CONAF, the Ministry of Agriculture’s National Forestry Corporation, has brought multiple lawsuits against Agrícola Brinzal. The lawsuits allege that the company’s logging practices are both illegal and environmentally devastating, wreaking irreversible havoc on Chile’s prized natural forests.

Furthermore, locals have maintained that the company’s actions have been detrimental to local communities. Carlos Muñoz Grandón, president of an organization of residents living near land owned by Agrícola Brinzal, was quoted in the report stating that the company’s reforestation negatively affects local farmers: “It’s a great impact—it’s a huge one—from the fumigations to the growth of eucalyptus, because we will have huge problems with water distribution...That’s going to affect animal and milk production, which is the economic source for people here.”

In recent years, Harvard Management Company has invested heavily in the timber asset class. The University first entered the sector in 1997 based on a suggestion by Jane Mendillo, now President and CEO of HMC, and began investing in Chile in 2004. According to Harvard’s 2011 tax filing, Harvard now owns at least 11 companies in Chile. Harvard holds these companies through subsidiaries—for example, Agrícola Brinzal is owned by Phemus Corporation, one of HMC’s wholly owned investment companies that enjoysnon-profit tax status.

Despite the fact that Agrícola Brinzal is 5,000 miles away from our Cambridge campus, Harvard is responsible for its practices and the practices of all its companies. Harvard often brags about the Harvard Forest, the site of the Harvard Forest Program on Conservation Innovation, where experts investigate the destructive effects that habitat degradation and development can have on the environment and local communities. Why should a company owned by Harvard allegedly neglect the environmental regulations and practices that our University’s own researchers deem so important?

Harvard’s aggressive approaches to timber and agribusiness in Latin America are unique among universities. A recent report identified only one university endowment with direct holdings in forestry and agriculture investments in Latin America: Harvard. Our peer institutions have so far entered the markets through indirect ownership schemes and externally managed funds. We are concerned that Harvard’s problematic practices may set new standards for endowment investing.

Jane Mendillo wrote in a September 2012 message that HMC employees “fully vet potential investments and investment partners for long-term viability” and perform “legal and operational due diligence” for every investment decision. Harvard’s ownership of Agrícola Brinzal casts serious doubts on the wisdom of HMC’s current policies. HMC ought to review, revise, and publish its due diligence policies and processes before the end of the semester so we can be sure such abuses will not happen again.

As a nonprofit education and research institution, Harvard University has the responsibility to ensure that it does not negatively impact the world. If Harvard is committed to funding research, student life, and financial aid from the profits of natural resource companies, it should, at the very least, ensure that its approach to natural resource investment does not actively violate the law as Agrícola Brinzal allegedly has.

Sandra Y. L. Korn ‘14, a Crimson editorial writer, is a joint history of science and studies of women, gender, and sexuality in Eliot House. Krishna Dasaratha ‘13 is a mathematics concentrator in Quincy House. They are part of the Responsible Investment at Harvard Coalition.