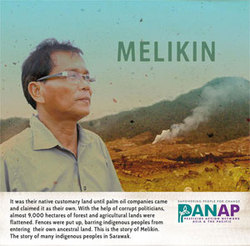 It was their native customary land until palm oil companies came and claimed it their own. With the help of corrupt politicians, almost 9,000 hectares of forest and agricultural lands were flattened. Fences were put up, barring indigenous peoples from entering their own ancestral land. This is the story of Melikin. The story of many indigenous peoples in Sarawak.

Sarawak, the largest state in Malaysia, is land of one of the oldest rainforests in the world. But for the past decade, it has seen one of the fastest rates of deforestation and land grabbing. It is estimated that only 5% of the forests remain because of the entry of large-scale logging and palm oil plantations.

Just like many indigenous communities in Sarawak, Melikin people fought back as it was their lives, livelihoods and culture, which were at stake. Despite violent harassments from palm oil companies that include hiring of goons and burning people's properties to quell the dissent of the communities, Melikin communities are determined to fight and assert their native customary rights to their land.