Karuturi: A litany of trouble

Karuturi: A litany of trouble

Karuturi Global Limited, a publicly registered holding company headquartered in Bangalore, India, may be under fire from the Kenya Revenue Authority (KRA) for tax evasion, but the complaints against it go further than that. The agribusiness firm, whose farm operations also straddle Ethiopia and India, has been dodging bullets about labour law violations, human rights abuses and environmental issues. Even the World Bank Group is no longer considering the company’s request for risk insurance for its investments in Ethiopia. This background note summarises the various problems that Karuturi has come to be known for among social justice movements around the world.

Every year around US$ 1000 billion disappears without a trace from developing countries, ending up in tax havens or rich countries. The main part of this is driven by multinational companies seeking to evade tax where they operate.

The sum that leaves developing countries each year as unreported financial outflows, referred to as illicit capital flight, amounts to ten times the annual global aid flows, and twice the debt service developing countries pay each year. During 2000-2008 Africa was the region with the largest real growth of illicit capital flight, amounting to 21.9 % per year.

This money, if properly registered and taxed in the country of origin, could of course contribute to fulfilling human rights like the right to education and health care, and make a major difference in the fight to combat poverty. Due to just two forms of illicit capital flight used by corporations (‘mispricing’ and ‘false invoicing’), developing countries are losing three times the amount that is missing to achieve the UN millennium development goals (like universal education, stopping the spread of HIV, and halving extreme poverty) in tax revenues every year.

(For all facts on tax evasion above and more info on mispricing please see “Bringing the billions back: how Africa and Europe can end illicit capital flight” by Fröberg and Waris, 2011)

In 2012, the Kenya Revenue Authority developed a team of transfer pricing experts to audit accounts of companies in order to assess whether there was transfer mispricing and tax evasion taking place. Some transnational companies that export from Kenya are notoriously adept at it. However, the government has had difficulty tracing these firms’ operations due to lack of capacity and to date all audits and assessments, apart from one against Unilever, have been settled outside of public view.

On the 4th of April 2013 Karuturi filed a notice of appeal against the decision of the tax tribunal for taxes due to the Kenyan government and the Kenyan people. According to ICRA, an Indian credit rating research agency, in an October 2012 analysis commissioned by Karuturi as well as Karuturi’s 2012 annual report, Karuturi has been facing a number of potential threats to its financial viability, namely:

The overall tax claims come to USD 26 million, which is about one-quarter of the multinational’s global turnover in fiscal year 2012 (USD 106 million) while the amount for Kenya amounts to almost 1 per cent of Kenya's total annual tax collection.

Money of this magnitude could be used as additional income for development or to replace some current taxes that target the poor like value added tax or even to delay the enactment of additional taxes like the one on maize flour due to be activated in Kenya in 2015.

Since 1996, Karuturi’s core business has been floriculture, producing 580 million roses per year from 289 hectares of land the company leases in Kenya (154 hectares), Ethiopia (125 hectares) and India (10 hectares). In 2012, the group commanded no less than 9% of the cut rose market in Europe. Since the 2007/2008 global food crisis, Karuturi began expanding from floriculture into food production. Its plan is to set up farming operations on over one million hectares, mainly in eastern and southern Africa, to produce primarily maize, rice, sugarcane and palm oil for international markets.

The hub of this expansion is Ethiopia. In 2009, Karuturi acquired 10,700 ha of land in Bako for maize, rice and vegetable production. In 2010, it got an additional 300,000 hectares for expansion in Gambela. The company aims to farm a total of 750,000 ha in Ethiopia. This land is leased from the government at bargain prices, but local communities consider it their own.

As a result, many conflicts have emerged around compensation, displacement and the relocation of villagers and herders who suddenly found themselves fenced off of their lands by the Indian company.

In 2011, Karuturi announced it was expanding further by pursuing a US$500 million investment for 370,000 ha in Tanzania, including an initial 1,000 ha in the country's fertile Rufiji Basin. That same year, the company announced that it was in discussions with government officials in the Republic of Congo for a farm project in a special economic zone in Oyo-Ollombo, 400 km north of Brazzaville. In addition, it has been planning fruit and vegetable farms in Sudan, Mozambique and Ghana, and, says CEO Ramakrishna Karuturi, “in Senegal, we have made an exploratory probe and in Sierra Leone we have made initial contacts.” All of these countries are rife with land grabs right now.

According to a 2012 report published by the London Business School, 5% of Karuturi’s workforce in Ethiopia is composed of foreigners. Karuturi has been bringing in staff and consultants from abroad, including India, to run management, irrigation & drainage operations, and logistics because they said they could not find the experience locally. Same for manual labourers. Karuturi hires Ethiopians as unskilled labour but for skilled labour it says it faces problems. At the end of 2011, Karuturi got into a dispute with the Ethiopian government because they brought in several hundred Indian farmers to work on their farms in Gambela, which the Ethiopian authorities said contravened Ethiopian law and for which they would not give the permits. Karuturi reportedly also expects to rely on Indian farmers to handle its work on oil palm.

According to media and labour organisation reports, workers on Karuturi farms in both Kenya and Ethiopia have been complaining about, and initiating labour actions against, various conditions, especially related to wages and safety.

In November 2012, Karuturi reportedly began laying off about 900 of its 3,500 seasonal workers in Naivasha, Kenya, due to financial problems. The number was later reduced to 600. In December 2012, 1,000 Karuturi workers went on strike to demand action from management on unpaid salaries and poor working conditions.

Earlier, in June 2010, Workers Rights Watch, a Kenyan association, carried out focus group discussions with Karuturi flower farm workers in Naivasha and registered a mixed scorecard of positive and negative opinions about the company.

Regarding Karuturi’s Ethiopian farms, various media and research reports have exposed complaints of poor wages. For example, a solid report commissioned by the International Land Coalition shows that Karuturi pays Ethiopian farm labourers at its Bako farm ETB 10 per day (US$ 0.50) which compares with about ETB 20 per day (US$ 1.00) for labourers on commercial sesame farms in the country. Night guards for the company are said to be paid ETB 300 per month (US$ 15) if they own a gun and ETB 200 (US$ 10) per month if they do not.

According to a powerful 2012 report by Human Rights Watch, the Ethiopian government is forcibly relocating thousands of indigenous people in western Gambela to new villages lacking adequate food, farmland, healthcare, and educational facilities to make way for large scale agricultural projects of foreign investors, including Karuturi. The report said, based on interviews with community representatives, that crops of local Anuak communities were cleared without consent for the Karuturi operations and that residents of Ilea, a village of over 1,000 people within Karuturi's lease area, were told by the Ethiopian government that they would be moved in 2012 as part of its "villagisation programme". In response, CEO Sai Ramakrishna Karuturi denied any connection between his company's activities and the government's villagisation programme. In conversation with the Wall Street Journal’s unit in India, he described the Human Rights Watch report as "hogwash" and "a completely jaundiced western vision", and even denied that the villagisation programme exists.

Karuturi's 10,700 ha Bechera Agricultural Development Project in the Bako Plains of Ethiopia has deprived several local communities of their communal grazing areas and access to water for their livestock, thus severely affecting their livelihoods. This comes from a study commissioned by the International Land Coalition, based on detailed discussions with local communities, local authorities and Karuturi employees. The study documents how the lands were provided to Karuturi without the consent of the local communities and without compensation. It reveals that Karuturi is refusing to implement even the most minimal measures recommended by local authorities to address some of the impacts from its operations. For example building a livestock corridor through its fields so that locals could access water sources for their animals, or allowing them to graze their animals on crop residues. 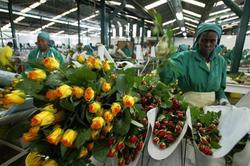 Karuturi operates one of the largest flower farms in the Lake Naivasha Basin in Kenya, the country’s second largest freshwater lake. The flower farms are blamed for causing a drop in the lake’s water level, for polluting the lake with pesticides and chemical fertiliser runoff and for affecting the lake’s biodiversity. Workers at Karuturi’s flower farms in Naivasha who spoke with Muungano wa Wanavijiji, a local partner organisations of Forum Syd, in February 2013 said that the dilapidated condition of the Karuturi operations and poor protective clothing puts them at risk to exposure from chemicals. They say the company does not seem to care about their concerns.

For its farm in Gambela, Ethiopia, Karuturi has developed an irrigation system with 50km of canals, 50km of drainage, and 40km of dykes, to pump a reported 22,000 litres of water per second from the Baro River, a crucial source of water for people dependent on the White Nile. Karuturi’s smaller 10,700 ha farm in Bako also generates significant issues related to access to water and water quality for the local communities. Although environmental impact assessments are usually required for irrigation projects in Ethiopia, Karuturi reportedly did not undertake any such assessment prior to constructing its farming complex in Bako.

Karuturi and its shareholders have been waiting since at least May 2011 for the World Bank’s Multilateral Investment Guarantee Agency (MIGA) to approve the company’s long pending bid for political risk insurance for its Ethiopian operations. According to Sai Karuturi, as of 2012 the application had still not been approved due to Karuturi’s plans to produce palm oil -- a sensitive issue for which the Bank would require the Ethiopian government to put in place environmental protocols. Karuturi explained that he was therefore advised by MIGA to omit palm oil from the application for now and so he did. If MIGA protection fails to materialise, the company told investors that its fallback option would be to seek support from India’s Export Credit Guarantee Agency. On 29 January 2013, MIGA informed GRAIN, flatly, that Karuturi’s application “is no longer under consideration”.

In March 2013, Bloomberg reported that Karuturi was seeking “hundreds of millions” of fresh investment dollars from an unnamed sovereign wealth fund after yet another unnamed development bank refused it a loan.

In April 2013, the Indian paper Business Today reported that Karuturi was thinking of taking the company private.