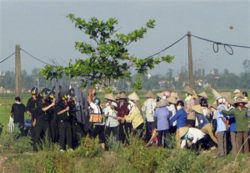 BANGKOK (TrustLaw) – In 2009, the Association of Southeast Asian Nations became the first regional bloc in the world with a legally binding pact to deal with disasters because the region is so vulnerable to the forces of nature.

A year earlier, the 10 countries that make up ASEAN agreed to set up a regional structure on food security in response to soaring food prices in 2007-08.

Now land rights advocates are hoping ASEAN will come up with a regulatory framework to check private sector investment in land, particularly for agriculture, as land grabs and land-related conflicts soar in the region.

The two-day Asia Land Forum in Cambodia’s capital Phnom Penh ended on Wednesday with a plan to lobby for an ASEAN investment policy that takes into account international guidelines and safeguards on investments in land. They want the policy to cover such issues as land tenancy, informed consent before land is sold and environmental impact statement for large-scale land acquisition for agricultural, mining or forestry purposes.

It won’t be easy, however.

The issue of land is extremely sensitive in the region, yet it isn’t high on ASEAN’s agenda. But investment is, as the group aims for regional economic integration by 2015.

“Unless there are rules and policies and a regulatory framework at a regional level, perhaps some of the bad impacts of the investments and large land acquisitions can escalate,” Cherian Matthews, deputy regional director of Oxfam Great Britain in Asia, said in a telephone interview from Phnom Penh.

“So this is the right moment for us to advocate for such a policy framework,” he said.

“The first thing is really to sensitise the governments in terms of land issues and that's why for the last two years at the Asia Land Forum, we invited some government officials to participate,” said Nathaniel Don Marquez, executive director of ANGOC, which organised the forum together with International Land Coalition Asia and STAR Kampuchea.

Despite the region’s impressive economic growth, many ASEAN countries are still rural economies.

As governments and companies move to exploit natural resources, large-scale land acquisitions are pitting communities and activists against powerful interests who have acquired land for a range of purposes from speculation, biofuel and food production to infrastructure projects.

Protests, clashes, court cases and campaigns against the deals in the region are becoming more common.

On Oct 1, a day before the forum began, Cambodia sentenced 71-year-old Mam Sonando, a prominent government critic and land rights campaigner, to 20 years in prison for leading an anti-state rebellion, a verdict condemned by rights groups.

On Oct 4, Voice of America reported that a provincial court threw out the murder case of prominent Cambodian activist Chut Wutty, who was killed in April after years of fighting illegal logging and corruption by government and big business.

An area estimated to be between 56 and 63 percent of all arable land in Cambodia has been handed out to private companies, Oxfam said in a report released Thursday. In poor countries foreign investors bought up land area the size of London every six days between 2000 and 2010, it added.

Oxfam is calling for a temporary freeze by the World Bank on all agricultural investments while it reviews ways to stop land grabs.

“In ASEAN, Myanmar is also opening up. So a huge investment and rush for land is also taking place in Myanmar,” said Oxfam’s Matthews.

“One of the reasons why we're going the regional way is also because some of the civil society organisations and communities are not able to exert their pressure at a national level because they have been threatened and so on,” he added.

“That means being equipped with more evidence-based research, being able to back up our claims, and having solid studies, so when we talk with decision-makers we can really say our claims are supported by facts,” he said.

While Cambodian government’s behaviour towards land rights activists has triggered criticism at home and abroad, Marquez is optimistic.

For him, the attendance of government officials, like Cambodia’s Secretary of State for the Ministry of Land Management Chhan Saphan who gave opening remarks at the forum, is a positive step.  A meeting here in March on land issues had to find a new location at the eleventh hour because the original hotel did not want to lose their license for allowing the event, he said.

“That’s how sensitive the land issue in this country is,” he told TrustLaw.

“The fact that (government officials) participated and stayed for two days is a big step. It should be seen as an opportunity and an entry point to further engage them,” Marquez added. “I don't see any point of not engaging them.”