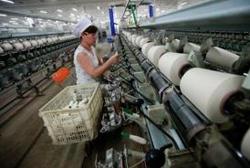 The deal also involves plans to produce wheat, barley, sorghum and maize, as well as the allocation of massive water entitlements. (AFP)

Treasurer Wayne Swan approved Chinese textile group Shandong Ruyi's purchase of Cubbie Station, which covers almost 1,000 sq km (390 sq miles) of south-western Queensland and which has been in administration since 2009 with more than A$300 million ($310 million) of debts.

"The proposal would bring an end to this long period of uncertainty, helping ensure the ongoing operation of Cubbie Group, protecting jobs and supporting economic activity," he said.

Ruyi and Cubbie's administrators would not comment on a price for the cotton farm, valued at up to $500 million, but said the foreign investment approval cleared the way for further negotiations on a sale.

Under the proposed purchase, Ruyi will take 80 percent of the Cubbie Group, while Ruyi's Australian partners, the fifth-generation wool processors the Lempriere family group, will take a 20 percent stake.

Swan imposed a number of conditions on the deal, saying Ruyi would need to reduce its stake to 51 percent within three years.

Similar sell-down conditions were imposed on China's Yanzhou Coal on its takeover of coal miner Felix Resources in 2009. Swan in March gave the company a one-year extension to cut its stake in its unit Yancoal.

Swan said the Lempriere group would be responsible for operating Cubbie Station and for marketing the cotton on the international market, easing concerns Ruyi could use the deal to lock up a cheap supplies of cotton.

Cubbie can grow up to 330,000 bales of cotton in a good year, as well as some wheat, barley, sorghum and corn. The station also has entitlements to a massive 537,000 mega litres of water, or enough to fill Sydney Harbour.

The water allocations have raised political concerns that the sale to a Chinese firm could hopes of reforming water policy in Australia's Murray-Darling food bowl, and the sale has drawn anger from those who wanted the government to block the deal.

"It is a mongrel of a deal," independent lawmaker Nick Xenophon told Reuters. "The conditions give a veneer of Australian involvement but result in Australia losing control of a strategic asset."

Xenophon and opposition lawmakers have long pushed for a reform of foreign investment rules for farm purchases, and they want the secretive Foreign Investment Review Board (FIRB) to lower its thresholds for approvals.

At present, the FIRB only looks at foreign investment proposals if a purchase amounts to 15 percent or more of an entity valued at A$244 million, meaning the great bulk of smaller farm sales avoid scrutiny.

The opposition has proposed lower thresholds of $15 million.

The FIRB examines all proposed investments from state-owned enterprises, adding an extra hurdle for Chinese investments, where ownership structures and government links are considered less transparent.

The government is refusing to budge on foreign investment rules, but a Senate inquiry into the issue is due to report in mid September and is likely to increase pressure to lower FIRB thresholds and keep an accurate register of foreign ownership.

The latest figures from the FIRB show agriculture accounted for less than one percent of the $177 billion worth of foreign investment proposals it considered in the year to June 30, 2011.

Ruyi, based in the east province of Shandong, is a major player in China's textile market and ranks among its top 500 companies, with 15.3 billion yuan ($2.4 billion) of revenue in 2011.

The company's website says it is looking to "strengthen international cooperation and establish a global supply and industrial chain".