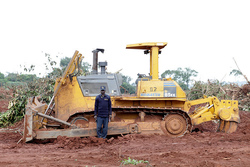 As food prices soared and some producer countries placed restrictions on their exports in 2008, a flurry of interest in foreign investment in agriculture was ignited.
Africa, endowed with much fertile but underdeveloped land, found itself the focus of much of the attention, particularly from oil-rich, import-dependent Gulf Arab states.

The interest triggered a series of announcements about planned mega-projects, from Zambia to Sudan, as food security took on fresh importance.
But it also had a second impact – raising the debate about the sustainability and risks that accompany large-scale foreign investment in the land of often poor, undeveloped African states that in many cases struggle to feed their own people.
Often the schemes attract the pejorative tag of “land grabbing” and there have been high-profile controversies, such as the attempted involvement Daewoo, the South Korean conglomerate, in an agricultural project in Madagascar.
Experts say that, ultimately, many of the plans of 2008-09 failed to materialise as the food crisis abated and investors became more aware of the political risks and huge logistic difficulties. But as populations grow and consumption habits change, the trend of foreign investor interest in Africa’s soils is expected to continue.

There are no precise figures on the scale of land acquisitions, but Land Matrix, an online database of land agreements, has tracked 986 deals since 2000, amounting to 57.3m hectares of land – 41 per cent of it acquired in Africa, with Ethiopia, Sudan, Zambia, the Democratic Republic of Congo and Madagascar among the top 10 targeted countries.

Africa stands out because much of the land is in the hands of the state and can be relatively cheap, while several governments have been seeking investment in agriculture, says Michael Taylor, at the International Land Coalition.
“It is of serious concern that the investment model that has been used up to now, that of acquiring land, is seemingly the dominant one, so there’s a need for regulation. There’s a need for governments to be making firm decisions in light of a broader strategy on rural development,” he says. “We talk to many stakeholders and the one thing we hear right across the board is that we need investment, but it has to be the right kind.”
It is an issue that goes to the heart of the debate around large-scale land projects in Africa – whether foreign investment can be used to aid badly needed development rather than being deemed exploitative.
Paul Mathieu, a senior land tenure officer at the UN’s Food and Agriculture Organization, says: “It cannot be seen as necessarily negative, it can be positive, if it’s handled in the proper way from the start,” says .

“People may become more cautious and more keen to consider types of investment that do not necessarily imply the acquisition of land.”

Investors could employ people as contract farmers rather than displacing them. “It all depends on how it’s done,” Mr Mathieu says.

He says that what is often overlooked is the increasing role of domestic investors in agriculture, but adds that governments often struggle with limited technical and human resources to monitor and regulate projects.

However, there is a risk that, if governments and investors become too cautious, it could stymie investment altogether, says Chris Isaac, director of business development at AgDevCo, a non-profit organisation that works on sub-Saharan Africa agricultural projects.

He says: “There need to be more visible examples of things that work well and that will take some time, because patient capital [long-term, low cost debt] has become available only recently.”

He believes there are benefits when multinationals source local produce through contract farmers or if commercial farming hubs are extended to enable communities to share in expensive large-scale infrastructure such as irrigation systems.

Mr Isaac says: “We think that model is the only way for certain crops, particularly field crops such as rice, to get productivity levels up to where you can really tackle food insecurity.

“If you can secure the markets for farmers, that puts you in a good place. But you need to do more than that. You need to help farmers become more productive.”

Mr Isaac is based in Mozambique, a poor country with an estimated 36m hectares of arable land available, of which less the 16 per cent is under production, according to the UN. It has attracted significant foreign investor interest in biofuels projects, rice schemes and forestry plantations.

But some have failed, while others have come into conflict with local communities.

Mozambique also illustrates the underdeveloped state of domestic farming in many African countries – two-thirds of Mozambican farms struggle on two hectares or less, while 42 per cent of farms are unable to ensure food security for the household throughout the year, according to a UN report.

“Unless you bring in private investment, technology and skills, it’s going to be very difficult for the agriculture sector to move beyond where it is today,” Mr Isaac says.