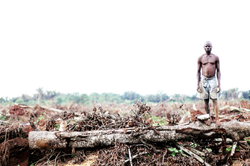 Responding to concerns raised by Friends of the Earth International and others about the impacts of land grabbing, The World Bank claims that land lease deals in developing countries can reduce hunger and poverty, and build sustainable agriculture. The facts tell otherwise.

Does leasing or purchase of land in developing countries have the potential to improve agricultural productivity and the livelihoods of small farmers?

A recent World Bank blog post, responding to concerns that we raised in our land grabbing campaign, claims that this is a real possibility. It is also a theme pursued in the World Bank annual meeting on land and poverty. Yet the facts tell otherwise.

Recent reports on land grabbing show that in reality, land grabbing displaces thousands of communities, is causing violent conflicts, undermines livelihoods and does not generate promised jobs (See for instance Oxfam and the Oakland Institute). In fact, the World Bank’s own report on land grabbing fails to find evidence of the benefits of land grabs. Instead it reports that

'many investments…failed to live up to expectations and, instead of generating sustainable benefits, contributed to asset loss and left local people worse off than they would have been without the investment'.

The cases detailed by the Bank study found overwhelmingly negative impacts while any benefits remained confined to theoretical possibilities.

The Bank clings to the theory that land deals, if conducted properly, can reduce hunger and poverty and build sustainable agriculture, even if this is contradicted by the evidence. The latest of this is the release of world’s largest database of land deals struck since 2000. The results from examining 1,006 deals are startling.

Overwhelmingly investors are targeting poorer countries with weak land tenure security, largely poor countries in Africa. Sixty-six per cent of land acquired is from countries that have above average hunger combined with a high share of GDP from agriculture. But almost two thirds of the crops produced are for possible non-food use. This is not all. In all the cases with available information (393), export is the principal aim of the production. Domestic markets are of marginal concern.

A clear and ugly picture emerges. Investors are looking for countries with cheap and easy access to land to give them high returns and export food. But these countries are the most at risk of hunger. As the analysis shows, the dependence of the poor in these countries on agriculture means few other jobs are available.

While the World Bank talks of 'helping small holders catch the wave of rising interest in farmland', smallholders are being pushed into hunger and poverty by these very land grabs.

The top ten crops grown in acquired land paint a clear picture of what kind of use the land is being put to:

All these crops bar one (rice) are demanded by various commodity markets ranging from agrofuels to carbon markets to animal feed that provide huge profits for agribusiness and investors that speculate on them. None other than maize are staple food crops in Africa.

What about claims of sustainable agriculture? The largest share of land acquired is from forested land - 24% of all deals and 31% of their total area. Forests are being converted to plantations by land grabs.

The World Bank paints this grim picture as an abstract worry of Civil Society, while at the same time continuing to press for more land investment.

Less than a month before the World Bank land conference, its Multilateral Investment Guarantee Agency (MIGA) announced that it was providing $2.9 million in political risk insurance to the UK's Unifruit Ltd for the construction of a 1,000 ha farm in the drought prone district of Ethiopia that will produce fruit and vegetables for export to European supermarkets. This is the latest in a string of MIGA protection for land grabbers.

The World Bank denies its involvement with the expansion of palm oil in Uganda. Yet according to the International Fund for Agricultural Development (IFAD)

'The World Bank was strongly involved in the design of the project and was cooperating institution from the start until August 2004. It played a key role in facilitating negotiations between the Government and the private investor. (…). Both institutions made important contributions to project supervision, although they focused primarily on the Oil Palm Subproject and gave very little attention to the Essential Oils Subproject.'

The World Bank was also involved in technical appraisals of the project and, according to IFAD, its 'supervision reports show a high degree of commitment to and knowledge of the project. The Bank was able to use its influence to push forward negotiations on the selection of the private investor and it performed an important mediating role'.

Documents from the Agriculture Ministry of Uganda show the World Bank was involved in the projects final sign off and launch. To date, the company involved, BIDCO, claim a partnership with the World Bank on their website.

After the project was up and running, the World Bank withdrew as it feared the project would not comply with its internal forestry safeguard policies, although these were threats raised by initial Environmental Impact Assessments. The key concern is that through decades of support for market based land policies and export oriented industrial agriculture the World Bank has set the stage for land grabbing. Now, all the talk of transparency, good governance and responsible investments by the Bank and others hides the brutal reality behind it.

Access to land and resources has long been recognised as vital to ensure food and livelihoods for the world’s rural poor. Social movements have long warned that land grabbing forecloses vast stretches of lands and ecosystems for current and future use by peasants, indigenous peoples, fisherfolk and nomads, seriously jeopardising their rights to food and livelihood security. It captures whatever water resources exist on, below and around these lands, resulting in the de facto privatisation of water.

The violation of international human rights law is an intrinsic part of land grabbing through forced evictions as well as the introduction of non-sustainable models of land use and agriculture that destroy natural environments and deplete natural resources, the blatant denial of information, and the prevention of meaningful local participation in political decisions that affect people's lives.

This is why Friends of the Earth International along with several of the leading civil society actors campaigning on land grabbing is supporting the call of farmers’ organisation La Via Campesina that the World Bank has no legitimate role in land policies. We are demanding that it is governments who must step up to their responsibility and take urgent steps to stop land grabbing, rather than listen to those that assist it.