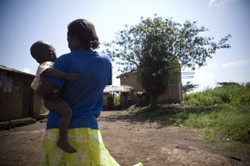 Lillian (not her real name) is one of thousands who claim she was evicted from her land (Photo: Oxfam)

The price for Uganda Land Alliance’s investigations into cases of land grabbing has been set-so high that once paid, it will become extremely risky for anyone attempting to question the vices of land grabbing and forceful evictions of innocent citizens. Government has given ULA two weeks within which to among other stern conditions; provide evidence of land grabbing or else have her permit revoked; and to make an apology to the President and government ministries… This follows a Thursday 26th April meeting with the Minister for Internal Affairs Hillary Onek, that coincided with the launch of the national campaign against land grabbing spearheaded by the Food Rights Alliance.

The above conditions were contained in a damning 19-page investigation report on the works of ULA, produced by the Ministry of Internal Affairs. The report claims that ULA’s investigations have brought the President’s name into disrepute, and have made the government to be viewed as a regime that condones gross human rights abuses. The report further recommends that “the NGO Board issues ULA a stern warning, stating that her certificate would be withdrawn if it does not take the suggested corrective actions within 60 days, and ULA should withdraw the land grabbing report and documentary on Uganda.”

“Uganda Land Alliance reiterates the fact that investment on land is good for economic development. However, our major concern is that in the process of effecting investment opportunities, government must unreservedly prioritize the livelihood and overall survival of the citizens of Uganda in accordance with the laws of Uganda and international human rights standards. Government must ensure that safeguards are in place to ensure that landlessness and poverty does not increase” says Esther Obaikol, Executive Director ULA. Uganda Land Alliance does not believe that this is the time for apologies, but instead urges all stakeholders including government, the investors, civil society campaigners and the affected communities in various parts of the country to come to a round table, and deliberate on the best way to strike a balance between investment and national wellbeing thus ensuring a win-win situation.

Background to the threats

Oxfam International and Uganda Land Alliance, on September 22nd 2011, launched a Global report on land grabbing, highlighting cases from various countries, including Uganda. The report critically indicates a land rush by foreign governments and international companies often to produce food for their citizens back home and other lucrative non-food investments. An estimated 227 Million hectares have so far been either leased or sold in a cross section of developing countries. Other countries profiled in the report include Honduras, Southern Sudan, Guatemala and, Indonesia. The report recommended that concerned governments and companies pay attention to the grievances of affected communities, ensure equitable access and usage of land, transparency in land deals and that if people must be evicted anyway, their human rights be respected. (http://www.oxfam.org/grow/policy/land-and-power )

The Uganda Land Alliance (ULA) is a membership consortium of over 60 national, regional and international civil society organizations and individuals, lobbying and advocating for fair land laws and policies that address the land rights of the poor, disadvantaged and vulnerable groups and individuals in Uganda.

The Alliance was established in 1995 as an independent non-governmental legal entity, registered as a company limited by guarantee. It envisages a Ugandan society where there is equitable access and control over land, and where the poor women, men and children are actively participating to eradicate poverty.

Since her inception, ULA has proven itself as the leading organization in Uganda advocating for fair land laws and policies, and has on several occasions engaged with government representing voices of the poor men, women and children in Uganda. ULA spearheaded CSO participation in the drafting and later amendments of the 1998 Land Act and most recently drafting of the National Land Policy. The Alliance performs duties as mandated by its membership comprised of top Civil Society Organizations in Uganda.